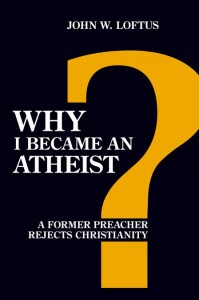 In part 1 of this review I provided evidence that while Loftus stopped being a Christian, he remained a fundamentalist. But what kept him a fundamentalist? Interestingly, the book itself provides some tantalizing clues to explain why this is the case.

“I probably had no doubts about my faith at all, and with good reason. I had never encountered anything at all to the contrary. It just all made sense.” (24)

Like Loftus, I too had a relatively provincial inculcation into the Christian tradition, including fundamentalist apologetics and dispensational eschatology. But my experience with Christianity was not characterized by the lack of doubt that Lotus describes, at least not since my teen years. I have long wrestled with issues like biblical interpretation, science and the problem of evil. Sadly, many Christians are sold the idea that doubt and questioning are impious and dangerous. Those are false and deeply harmful ideas which I have repeatedly critiqued. Loftus seems to have been reared in this type of Christianity. Consequently, his intellectual formation was shaped by sharp binary oppositions (e.g. “good” vs. “evil”; “light” vs. “darkness”, “right” vs. “wrong”, “certainty” vs. “doubt”). Such simple oppositions provide tantalizingly straightforward ways to order the world. Unfortunately, they do so at the expense of the essential nuance — those thousand shades of grey — that characterize real life.

Unfortunately, it appears that Loftus’ experience in seminary did little to nuance his sharp binary oppositions or to offer a critique to his unwavering confidence. Consider the fact that while he graduated from seminary in 1985, it wasn’t until the early 1990s that Loftus really began to wrestle intensely with basic hermeneutical questions. He recalls at this time a dispute he had with his cousin Jeff which provided the catalyst for reflection on biblical interpretation:

“How could he [Jeff] get it so wrong? And he was wrong. From this I began to reflect on the many different interpretations people have of the Bible, and I began to ask whether it’s possible to have a correct understanding of the Bible if people as close to each other as he and I could have such a misunderstanding.” (31-2)

To be honest, I find it hard to understand how Loftus could have completed a seminary degree without having wrestled with basic hermeneutical questions. That certainly isn’t the case at the progressive evangelical institution where I teach. Students at Taylor Seminary commonly describe the sense of vertigo that they experience upon first coming to school and taking classes in hermeneutics, theology and biblical studies. For many of them this is the first time in their life that they are forced to wrestle with deep existential questions regarding the interpretation of texts and the meaning of doctrine. In an ecumenical environment (Baptists, Pentecostals, Lutheran, Reformed, Anglican, etc.) they are forced to defend their prejudices, and no student emerges unscathed. Surely that’s the way a seminary education should be. For Loftus to have graduated seminary without having wrestled with these deep questions suggests to me a systemic failure in his intellectual formation.

To this point we’ve been considering Loftus’ “sociological and cultural background”. But we should not overlook another crucial factor: his personal psychological profile. Loftus provides a bit of his own personality profile at the beginning of chapter 1:

“If there is one thing that can be said for me, it’s that I am a very passionate man. When I focus on something and commit myself to it, I give it my all.” (21)

This certainly rings true for those who know Loftus. He was a sold out Christian who, by his own admission, had “no doubts about [his] faith at all”. So is it any surprise that now that he has become an atheist he once again has no doubts? (For a discussion of how Loftus has no doubts about his atheism see my article “John W. Loftus and the Ideologue Barometer.“) I think it is important to take Loftus at his own word here. When he was a Christian, he committed to it fully with no doubts. When he became an atheist, he committed to it fully with no doubts, because that’s just how Loftus is.

As for his description that he is a “very passionate man”, that’s one way to put it. I am reminded here of Martin Luther who famously observed, “I am hot-blooded by temperament and my pen gets irritated easily.” Frankly, I find Loftus and Luther to share a very similar psychological profile. Highly emotional, easily antagonized, and intolerant of nuanced positions (consider Luther’s vociferous response to Erasmus’ mediating position). Luther could not fathom how a Catholic could, in good conscience, choose to remain in the Catholic Church. Nor could he imagine how a Jew could, in good conscience, choose to remain in the synagogue. Similarly, Loftus cannot fathom how an intellectually aware Christian could remain within Christianity:

The first chapter of Loftus’ book chronicles his disappointments and betrayals suffered at the hands of Christians. I am sorry for the treatment Loftus received. (At the same time, one must keep in mind that only one side is represented in this book. One can guess that the other characters in the story might recollect things rather differently.) But is it any surprise that the passionate Loftus who was embittered by the church took that same passion which had been nurtured within the unreflective, binary oppositions of his conservative Christian years, and instead turned it against the very same church with the same unwavering devotion?

All this helps explain why Loftus remained a fundamentalist even after leaving his Christianity to one side. These are the categories into which he was nurtured as a young man and this is the natural fit for his highly emotional and uncompromising personality profile. That is all worth keeping in mind as we proceed through the book, for it casts into some question Loftus’ ability to provide an objective and dispassionate treatment of the issues he chooses to address.

But this doesn’t merely provide a caveat for us as readers. It should provide a caveat for Loftus as well. Has he come to terms with the extent to which his formative years as a (Christian) fundamentalist combined with his own “passionate” personality profile shape the way he engages with complex intellectual issues as an (atheistic) fundamentalist?