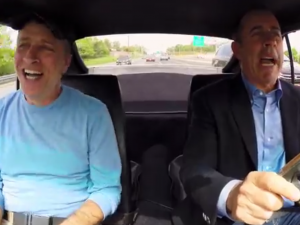 Humor is a beautiful thing. It makes us human and it helps us deal with the very worst that life can throw at us. In life’s darkest moments the comedian’s salve is no less worthy than the priest’s.

I was reminded of this the other day while watching an episode of Jerry Seinfeld’s “Comedians in Cars Getting Coffee.” It’s a great net program in which Jerry Seinfeld drives a car (it changes with every episode) to pick up a fellow comedian to get coffee. And they talk. And we laugh.

But more often about life itself.

Case in point: in a recent episode Seinfeld got coffee with fabled Comedy Central newsman, Jon Stewart. Stewart makes a comment about the free hummus that a comedy club called The Cellar provides for the performers. Seinfeld is familiar with the club and their complimentary hummus, and he recalls to Stewart the following exchange:

“I’m in the cancer ward at Sloan-Kettering [a cancer treatment facility in New York], and I’m visiting a friend who’s dying. He’s got about a month left.”

Stewart: “Omigod, does he know?”

Seinfeld: “Yes. And he says to me, ‘What are you doing tonight?’ I said, ‘I’m going down to The Cellar. I’m tryin’ to work out some stuff.’ And he couldn’t swallow so he had a cup. As we’re talking about goin’ down to The Cellar, he coughs up this horrible thing. And he says, ‘I’m so sorry.’ I go, ‘That’s okay, it’s gettin’ me in the mood for the hummus.’ I mean, it was a big laugh, and he’s dying. That was one of the best laughs I ever got in my life because in that moment he was happy.”

That brought tears to my eyes. Like I said, a salve no less worthy than that of the priest.

You can watch the full episode here.