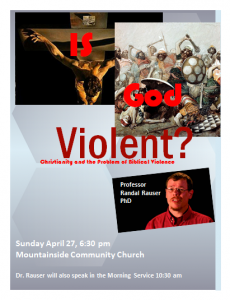 Mark Twain once wrote of the Bible, “It is full of interest. It has noble poetry in it; and some clever fables; and some blood-drenched history…” The interesting thing is that Christians often avoid that history: from the flooding of the earth to the destruction of Jericho, they read those “blood-drenched” parts of the narrative selectively if at all.

This is clearly an intolerable situation. Suppressing moral concerns is a recipe for cognitive dissonance while avoiding problem texts (or reading them with rose-coloured glasses) is a subtle subversion of the very scriptural authority that Christians profess. In short, intellectual honesty and scriptural authority demand nothing less than the direct engagement with the text.

With that in mind, this episode of The Tentative Apologist Podcast features a two hour lecture on biblical violence that I recently delivered at Mountainside Community Church in Fernie, BC. In the lecture I identify five kinds of violence in the Bible: divine retribution through natural disasters, Yahweh war, punitive stoning, Christ’s sacrifice of atonement, and damnation in hell. Having surveyed the extent of the problem, I then focus in on one of these examples of violence — Yahweh war — and survey the various ways that Christians have addressed this violence. Whether an answer (or a range of answers) is to be found in the current conversation is up to the listener to decide. But we can no longer avoid the question.