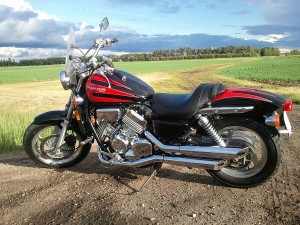 Last autumn I wrote 90% of an article on motorcycling and theological reflection. I never quite finished the article and so it was slotted into the archives. When I came back to it a few days ago I contemplated a light editing for spring. But after a bit of reflection I decided I didn’t want to sacrifice the reflective, slightly melancholy tone of an autumnal reflection. And so I am publishing it now completed but with the original context.

Just over a week ago I put my motorcycle (pictured above) into storage for the winter. It is a 1996 Honda Magna, in the proud lineage of Honda’s V4 power cruisers. I was hoping to get another week or two on the road, but alas, the leaves were falling fast, the wind was turning cold, and snow was threatening. (This is the Canadian prairies, after all.) So I did the fall oil change, added stabilizer to the fuel tank, removed the battery, reduced tire pressure, jacked ‘er up in the corner of the garage, and draped on the bike cover. Time to hibernate ’til spring.

I’ve been riding motorcycles for most of my life. It all started more than thirty years ago with my first bike, a modest little Honda z50 with bulbous tires and a buzzy one cylinder whine. (See the picture below for a reasonable facsimile.) I started riding when I was six and I have many great memories tearing up Peach Flats on that little bike, winding in and out of the Ponderosa pines, sailing over bumps … and at least once sailing over the handlebars (thank the Lord for DOT approved helmets). 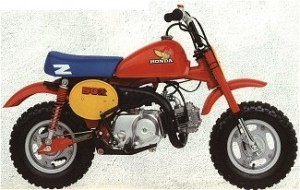 Next, I rode a temperamental Suzuki DS 80 and then a fine Suzuki DR 250. The few times I ventured stealthily out onto the street on the DR (sorry Dad) hooked me on road motorcycling, so it was a natural progression that I would get a street bike.

My first street bike was a modest 1984 Yamaha Virago 500. I remember riding home from ICBC (British Columbia’s equivalent of the DMV) with my newly acquired driver’s license and a smile wider than my handlebars. By the mid nineties I had graduated to a Suzuki Intruder 800, a stylish blend of ebony black and shiny chrome styled as a classic chopper. I had countless great rides on the Intruder through the coastal mountains and along the Sea to Sky Highway north of Vancouver overlooking the blue waters and snow-capped mountains of Howe Sound.

Sadly, when I moved to England I had to sell the Intruder, and it was only last year (2012) that I acquired the Magna and returned to my roots riding a Honda. Now with winter on my doorstep, I take this occasion to offer some musings on the philosophy of motorcycling and life (with an appreciative nod to Robert Pirsig). What follows are seven bits of philosophical wisdom, inspired by motorcycling and offered in no particular order. While they should all be familiar tidbits to the moderately reflective soul, they are that much better when they are inspired by the philosophy of two wheels.

1. Wherever you are, be there now.

Have you ever noticed how many people shuffle through life perpetually distracted? Case in point: a few months ago I was in line behind a guy at Starbucks who was talking on his Bluetooth while ordering a coffee. The whole time he never even looked at the barista, and so he never saw her roll her eyes … or heard her ask three times “Room for cream?” I thought to myself, “Geez, man, wherever you are, be there.”

I learned that bit of wisdom from motorcycling. You see, on a motorcycle, you can’t afford to escape the present. You can’t roll up the windows, turn on the air conditioning (or heater) and crank the stereo. The distractions are stripped away and you are forced into sensory overload. All you have are the rush of the wind, the bumps in the road, and the flurry of passing scenery. And you experience the world around you as you go whether you like it or not.

Consider a very simple example. You’re driving along in your car on an autumn evening. The sun is about to set as you drive into a little gully with a stream that has been bathed in darkness for a half hour. Moments later you’re out again and into the sun. Preoccupied with the song on the radio, you never even notice the gully. But enter that same gully on the motorcycle and suddenly the air temperature drops 5 or 6 degrees, enough to take your breath away. Moments later you’re whisked back up into the sun and the temperature shoots up again. As a result you are there and you recognize that a mere sharp jolt of temperature is a wake-up to the world around you.

Wherever you are, be there now.

2. We are all brothers and sisters (and how quickly we forget).

Motorcycling creates an immediate camaraderie with fellow enthusiasts. It’s like meeting fellow Mopar enthusiasts at the Chrysler-Dodge classic car show. That camaraderie is symbolized in the customary wave one gives to fellow cyclists that one passes on the road. How many motorists feel obliged to wave at every passing car (and suffer the guilt when they don’t)?

While motorcycling breeds community, it also reveals the human penchant to forget that common humanity even as one falls into exclusionary cliques. Harley riders rarely wave to non-Harley riders (or vice versa) while non-Harley cruiser riders and sport bike riders only intermittently wave to one another. Here one finds a sober reminder of how quickly the tenuous social bonds that bind us are broken by trivial differences.

3. The journey is as important as the destination.

Unfortunately this principle has become hopelessly clichéd, but it’s true. Indeed, virtually any theistic theodicy is bound to make reference to the soul-making potential of the human theater of experience as at least a partial explanation for evil. The lesson is that there is much to learn on the journey to any destination. And yet often we spend our lives waiting impatiently for the destination, never stopping to ruminate, to take in the world around us. Motorcyclists eschew the straight interstate for the winding country road. If only we did that in our daily lives.

The practicality speaks for itself. Bikes are great on gas. Okay, my bike isn’t that great, but then it still gets mileage to rival a Ford Fiesta with performance to shame a Ford Mustang GT. And of course you can park just about anywhere.

At the same time motorcycles are also impractical. Where’s the storage space? If you’re lucky, your bike will afford you about half the storage space you would have in a Ferrari. In my case I’ve got the choice of using saddle bags or a backpack. And you’ve got to dress appropriately. Boots, jacket, gloves, helmet. It all takes time to get ready to ride and that makes things complicated. And then there is the weather vulnerability. Not ideal in rain, and definitely no good in snow.

This brings me to the next point. You need to choose what you need. A couple weeks ago I discovered some stuff in my car’s trunk that had been sitting there since summer camp in August. Automobiles allow us the luxury to haul junk around unawares. But not motorcycles. Every item must be justified on every journey. If only we travelled through life as lightly as we must travel on our motorcycles.

6. To everything a season

The falling leaves, bright orange pumpkins on the porch, the flying V of the Canadian geese heading south with a flurry of parting honks, the pale blue sky of a late autumn afternoon, they all signal the end of motorcycling season. It is a melancholy time, but it is not bitter. Instead, it is a surprisingly sweet reminder of the rhythm of the seasons and of life itself. Over the next few months I look forward to frosty mornings, a newly frozen creek bed on which to walk the dogs, a crackling fire, Christmas, Valentine’s Day… And with the melting snows of March I shall pull the bike cover back…

As a child did you ever lose a toy only to rediscover it again months later? It was like rediscovering a long lost friend and acquiring a new toy all at the same time. That’s the promise of every spring as that prized possession emerges from hibernation. Just as long as it starts again! [Don’t worry, it did.]

I’ve had a few motorcycle accidents over the years, though none of them serious. But twice I have hit the asphalt going at a fair clip. And I have discovered that road surface is surprisingly hard and rough. I have experienced 500 pounds of metal fall on my leg and it is predictably unpleasant.

I know that motorcycling brings with it a risk, but it is not a risk without value for it provides an opportune occasion to contemplate one’s own mortality. Have you ever noticed that bikers seem to like skulls? For the most part the attraction seems to be merely stylistic: “Skulls are cool”. But historically in western art skulls have symbolized human mortality. When you think about it, it’s a fitting image. About fifteen years ago I was having a coffee on the patio of Spill the Beans, a coffee shop in the picturesque town of Fort Langley, BC. A Harley Davidson roared down the street, rattling windows for a couple blocks. “Idiot,” I snorted. Twenty minutes later we left, driving down the street the same way the Harley had gone. Half a kilometer out of town we came upon the flashing lights of police and ambulance, a car in the ditch and the twisted metal of the Harley on the road, and a large sticky smear — was that blood?!

I don’t know if that biker survived or not. But that day I was reminded of a lesson that I have encountered often. Motorcycles remind you that you are mortal. And the recognition of that mortality is itself a kind of gift as is every day I am alive.