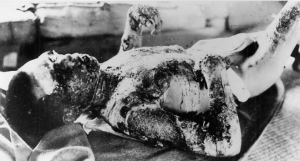 Over the last few days I was taken aback by the defenses of the bombing of Hiroshima and Nagasaki in the discussion thread to my article “How to destroy your enemies.” In a sense, the irony couldn’t have been greater, for the article was concerned to show that the best way to destroy one’s enemies is not to objectify them and literally destroy them. Instead, we do it by humanizing them, seeking to understand them, and thereby changing them from enemies to friends. So who would have thought that the discussion thread to this article would have produced a spirited defense of the very opposite response: that of dehumanization, objectification, and unmitigated destruction?

As I noted in the discussion thread, the civilized world no longer considers the targeting of non-combatants in warfare to be justified. Ever. Moreover, as I also noted, the same logic that justified dropping bombs on Hiroshima and Nagasaki justified flying two planes into the Twin Towers.

Terrorism is “the use of violence and intimidation in the pursuit of political aims.” By that definition, the bombing of Hiroshima and Nagasaki constitutes one of the great terroristic acts of all history, a concerted attempt to shatter the psyche of a population by the killing and maiming of hundreds of thousands of civilians and the decimation of two entire cities.

Now let’s consider a different scenario. Imagine that in 1945 the US army captured Akihito, the young son of Japan’s Emperor Hirohito. And just as they are planning to bomb Hiroshima and Nagasaki, an alternative is proposed: film the young boy Akihito being tortured, raped, and decapitated. Let’s say that various pundits reflected on this and concluded, given the exalted, quasi-divine status of Hirohito and his family in Japanese society, that the torture, rape and execution of his young son broadcast to the Japanese people would serve as the ultimate act of terroristic demoralization. If a person supports the bombing of Hiroshima and Nagasaki as a sound military strategy, surely they should also accept the torture, rape and decapitation of the terrified young boy. Indeed, they should very much prefer it given that this act of terrorism would require only one life rather than a couple hundred thousand.

I would have thought tens of thousands of corpses, people languishing with horrific burns and festering tumors, and two cities laid to waste would have been a sufficient reductio ad absurdum for the unconscionable targeting of civilians in Hiroshima and Nagasaki. But if it isn’t then think about this: by this reasoning the torture, rape and decapitation of a child would be a preferable course of action. Hopefully that conclusion is sufficient to show the gross immorality of the Hiroshima and Nagasaki bombing.

For in the same way you judge others, you will be judged, and with the measure you use, it will be measured to you.