Yesterday I watched the latest documentary from the wonderful PBS program “Frontline”. The documentary is called “Solitary Nation” and it is part of a two-part series on the criminal justice system in America which is called “Locked-Up in America.” You can watch the documentaries online here. 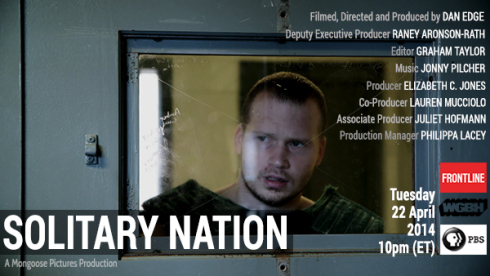 The film focuses on several months in the solitary confinement unit of the Maine State Prison. The unit consists of several small cell rooms with heavy doors and plexiglass windows and violent offenders locked up for 23 hours per day. Many start off facing the weeks or months they must spend in solitary with a stoic optimism. But soon they are in free fall decay. With nothing to do they plug their toilets to flood the unit, they slide feces under the doors and wipe it on windows, and they gash their wrists with tiny razors, slathering themselves with squirts of deep red blood. As you might have guessed, this is not easy viewing. It’s raw and it’s real.

I watched astounded at the resilience of the prison guards and other workers who risk life and limb dealing with these most-violent-of violent offenders. I gaped as I watched a worker dutifully begin wiping up sticky pools of blood left on the cell floor of a self-mutilating inmate. I was filled with a mix of compassion, revulsion and anger toward the inmates themselves. One voice inside said “You made your bed, now lie in it!” But the other voice snapped back that whatever might have brought them to solitary, this punishment was only making them worse. It embittered them with raging, anti-social tendencies of violence and aggression, little more than a finishing school for the self-destructive human spirit.

One furious resident had taken to threatening to kill the warden and guards if he wasn’t allowed back into the general prison population so that he could again have visits with his wife and two daughters. As I listened to him make his plea to the warden — in effect “Get me out of here or I’ll kill you” — I couldn’t help but think about C.S. Lewis’ famous description of hell as having gates locked on the inside. Lewis’ picture of hell was meant to be comforting and to shield us from the more drastic and morally problematic image of hell as a place where God actively tortures people. On Lewis’ view, hell is instead a place where people eternally torture themselves.

In other words, hell is a lot like Maine State’s solitary confinement unit. Lock people up indefinitely and leave them to cut themselves, beat the walls, flood their cells, and smear feces on the tiny windows.

The Lewisean view of hell has always seemed to me to be problematic. Watching “Solitary Nation” has hammered home that impression. Locking people up for months in a tiny room and standing by while they spiral into self-destructive misery is not a neutral or morally upright approach to jurisprudence. How much less should it be envisioned as such when set against the backdrop of eternity?