The other day I linked folks back to an article I wrote three years ago titled “You’re not special because the universe is really, really big.” This resulted in Jeff Lowder taking note of this humble, old article and offering a comment. (As an aside, the article is tickled pink to be receiving all this attention after being forgotten these last three years.)

But here’s the bad news. Jeff seems not to have liked the article much. Mike D didn’t like it either, apparently. Though in contrast to Jeff, he was unable to provide any constructive engagement. (I suppose it is tough to engage constructively with folks when you think they’re idiots.)

And what was Jeff’s problem? Let’s take a look. I’ll reproduce his comment here, but I suggest you take two minutes to read the original article so that you have some context. So without further ado, here’s Jeff:

I don’t know if your reconstruction of Sagan’s argument is accurate or not. Even if it’s accurate, however, I don’t think you are being very charitable. A more charitable response would have been something like this:

(1) It’s not clear what Sagan’s argument is supposed to be.

(2) Sagan seems to say X, Y, and Z, but that doesn’t justify atheism as a conclusion.

(3) But maybe there is a way we can strengthen Sagan’s argument. Here’s my attempt: A, B, and C.

(4) A, B, and C are a better argument for atheism, but even that doesn’t work. Here’s why.

I interpret your post as stating points (1) and (2), but lacking (3) and (4). With that in mind, I humbly suggest you consider this formulation of the argument as an improvement over whatever Sagan said. The basic idea is this:

It is slightly more likely on naturalism than on theism, though unlikely on both, that there would be a reason why we would have a spatially or temporally privileged position in the universe. So the fact that we don’t have such a position is evidence which very weakly favors naturalism over theism.

(For what it’s worth, I’m not consistently charitable with my dialectical opponents. So if I come across as being on a high horse, I apologize in advance. I’m far from perfect in this regard, though I do at least try to be charitable.)

To sum up, the basic charge is that I lacked charity in my proposed reconstruction of Carl Sagan’s argument in his book Pale Blue Dot: A Vision of the Human Future in Space. Am I guilty as charged?

I don’t think so. Indeed, I think Jeff misread the article. In the article I am seeking to satirize the way that folks like the maker of the “Star Size Comparison” video (who I will henceforth refer to as “YouTuber”) and Carl Sagan move seamlessly from the Copernican Principle, that is, the principle that human beings (and our planet, solar system, and galaxy) don’t have any privileged position in the universe to metaphysical conclusions about the ultimate nature of reality and our place within it.

The key point is that I don’t really believe there is any discursive process of reasoning in the way YouTuber and Sagan move from the Copernican Principle to metaphysics. Instead, so far as I can see, their perception of the awesome size of the universe and our non-privileged position in it provides the occasion for them to form certain basic beliefs such as “You are not special” or “We’re on our own” or “There is no God.”

I intended to tip off folks that this is satire with the humorous tone of the article, particularly my suggestion that the premises to a missing argument might be lost in the “gaseous depths of Aldebaran, or maybe in the same place as Saturn’s missing rings.” (That line still makes me smile three years later.) My final summary of Sagan’s “argument” in Pale Blue Dot was intended to hammer home the satirical nature of my discursive recreation:

(4) If you get far enough away from earth then it looks like a pale, blue dot.

So to recap, critiquing me for an uncharitable reconstruction of Sagan’s reasoning is misplaced since I don’t think his convictions are borne of a discursive reasoning process. Instead, I think he (and the YouTuber) look at the universe and it just seems to them that there is no God, we are not special, etc.

I returned to this topic last year in my article “Does the size of the universe support atheism or Christianity?” where I contrasted the original video with a parallel video in which Pastor Louie Giglio marvels at enormous star size as a ground to praise God. In that article I concluded:

“And as I said, also neither. Given that different presuppositions can interpret the data differently we have good reason to believe that the data itself underdetermines its own interpretation. Simply learning that the universe is vastly large and that there are huge objects within it doesn’t provide any evidence in and of itself either for atheism or (Christian) theism. The evidence, such as it is, awaits interpretation relative to a set of presuppositions.”

Now, finally, let me respond briefly to Jeff’s argument which he referred to in the comments (and which you can also read here). I am reminded here of part 1 of Jonathan Haidt’s book The Righteous Mind (Pantheon, 2012) which is titled “Intuitions Come First, Strategic Reasoning Second”. Jeff’s argument is plausibly taken as a valiant attempt to provide discursive support for the Sagan-YouTuber intuition.

However, there are difficulties afoot. We should remember, as John Locke famously pointed out, that one must apportion belief to evidence. (What’s the evidence for Locke’s principle, you ask? The principle is itself a basic intuitive starting point and applies to non-basic, evidence-dependent reasoning. So it is improper to take it as a universal principle. Locke was a foundationalist who recognized there must be axiomatic starting points to frame rational discourse.)

And this brings us to the difficulty. The YouTuber is clearly confident that, as he/she declares at the end of the Star-size comparison video: “No, you are not the center of the universe!” Here’s a screenshot of the last word (they appear in sequence): 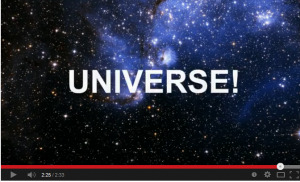 No tentative conclusions there. Your metaphysical insignificance (which is the obvious implied meaning of the geographic language) is apparently established.

Carl Sagan is likewise confident. Consider this YouTube video where he eloquently reads from Pale Blue Dot (pp. 6-7). I’ve excerpted three quotes below which begin at 2:00 into the video, but it is worthwhile listening to the whole:

So as Sagan declares in the passage:

“… our imagined self-importance, the delusion that we have some privileged position in the universe are challenged by this point of pale light.”

“In all this vastness there is no hint that help will come from elsewhere to save us from ourselves.”

“There is perhaps no better demonstration of the folly of human conceits than this distant image of our tiny world.”

Like YouTuber, Sagan is not tentative in his reasoning from the Copernican Principle to the conclusion that “You are not the Center of the Universe!” Instead, he makes a series of factual assertions: the self-importance of human beings is “imagined”, the assumption that we are in any sense privileged is “delusion”, there is “no hint” of help for the human species from beyond our planet, all the assumptions to the contrary are “human conceits”.

And here’s the problem. If one wants to defend YouTuber and Sagan with argument and evidence, one must have argument and evidence sufficient to support the degree of confidence they have in their conclusion. Jeff’s weak evidence favoring naturalism, even if successful, can never do that. Consequently, it leaves YouTuber and Sagan with a belief that is held with a conviction that far outweighs the quality of evidence supporting that belief.

In other words, YouTuber and Sagan are ironically worse off with an attempt to defend their beliefs as evidentialist conclusions than they would be if their beliefs were simply taken as non-evidenced basic belief arising from particular worldview presuppositions.