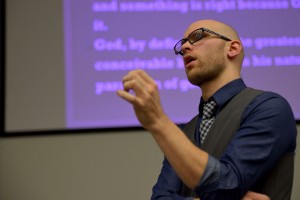 The question of God’s existence is arguably the most important of all philosophical questions. God is, by definition, that being than which none greater could be conceived. So it is little surprise that the question of whether that being exists has been considered a topic of supreme importance in the history of thought.

Set against the backdrop of philosophical history, we live in a rather peculiar age where many highly educated people have dismissed the entire discussion of God as being of negligible philosophical interest. Indeed, where the question is mentioned at all, it is often in the terms of crude caricatures in which God is lumped into the same derisive breath as invisible pink unicorns, fairies and flying spaghetti monsters.

But not all atheists are so dismissive. There are those who, whatever their skepticism about the answer, nonetheless remain serious about the question. They appreciate that one cannot plausibly dismiss God with the same cavalier wave of the hand that one shuns fairies and flying pasta bowls.

In this episode of The Tentative Apologist Podcast we sit down with an atheist who still considers the concept of God worthy of serious intellectual debate. Justin Schieber is co-host of the popular skeptical radio show and podcast “Reasonable Doubts“. But if Justin has his own reasonable doubts, he also appreciates the importance of a reasonable conversation. I recently sat down with Justin when he was in Edmonton to debate a Christian apologist at the University of Alberta. While I wasn’t that apologist, we still managed to get in our own conversational debate. So pull up a chair, stoke the fire, pour yourself a nice hot toddy (or, if you’re Baptist, a hot coffee) and enjoy a conversation on the biggest of questions.

To learn more about “Reasonable Doubts” you can visit their website here.

You can also listen to Justin’s recent debate on God’s existence with Christian Max Andrews here.

And check out Justin’s contribution to my blog series titled “Why They Don’t Believe”.