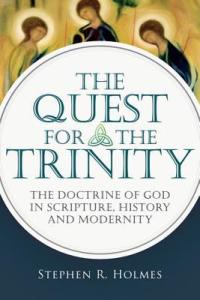 Stephen R. Holmes. The Quest for the Trinity: The Doctrine of God in Scripture, History and Modernity (Downers Grove, IL: IVP Academic, 2012).

When I was doing my PhD in systematic theology more than a decade ago, everyone was talking about a renaissance in the doctrine of the Trinity. Theologians like Moltmann, Pannenberg, Boff, LaCugna and my own Doktorvater Colin Gunton may not have agreed on much, but they did agree that the doctrine of the Trinity had long been neglected by the theological tradition. And they also agreed that a proper understanding of the doctrine would yield abundant practical fruit far beyond the confines of the doctrine of God. As Stephen Holmes puts it, in much recent theology there has been a suspicion of historic trinitarianism as little more than “useless orthodoxy” (2). In its place various reconceptualizations of the doctrine have been offered.

In The Quest for the Trinity Stephen Holmes subjects this spate of revisionist projects to its own scalpel with a ringing indictment that it “misunderstands and distorts the traditional doctrine so badly that it is unrecognizable.” (xv) Not only does much of the revisionist project fail to understand the tradition, but by the standards of that tradition many recent theologies of the Trinity are even heretical (2).

The book’s approachable cover, inviting title (a quest!) and short length (a mere 200 pages) convey the impression that this is a readily accessible volume, perhaps even introductory in nature. It isn’t. As I read The Quest for the Trinity my initial hopes that it might serve as a supplementary text in one of my introductory systematic theology classes quickly evaporated. While Holmes wrote the book to be “accessible” (xvi) I discovered quickly that this is a relative goal: Holmes’ aim was accessibility for upper-level undergraduate majors in theology, not a general audience of theologically novice seminarians.

That isn’t a complaint, of course. It is, rather, fair warning to adjust one’s expectations. As far as complaints do go, I really don’t have any. While I bought in initially to the “Trinitarian renaissance” in the 1990s, I soon developed my own suspicions about dubious historical reconstruction, pie-in-the-sky speculation, wooly “the Trinity changes everything” pragmatism, and the insatiable contemporary search for novelty. While I had made my own modest attempt at a broader critique of the trend (see in my review of Stanley Grenz, Rediscovering the Triune God in International Journal of Systematic Theology, 9, no. 2 (2007), 231-35), Holmes provides a magisterial, full on assault. This book lands like a bombshell on the playground of the Trinitarian theologians.

In the popular reconstruction of history that I was sold fifteen years ago, the Cappadocians were theological saints who wisely based their Trinitarian formulation on the ontology of personhood. Then Augustine came along and loused everything up by introducing the primacy of the one divine substance. And so enters de Regnon’s venerable thesis according to which the East begins with the threeness (and personhood … and goodness and light and gumdrops and rainbows) and the West with the one (and a metaphysics of substance … and badness and darkness and Plato and storm clouds).

Holmes shows, with delicious irony, that contemporary theologians do not understand the Cappadocians half as well as Augustine did. And together the Patristic theologians (East and West) share a common theological understanding of God as Trinity (see the summary on 146). This common vision continued to be faithfully developed through the Medieval and Reformation periods.

Contemporary Trinitarian theology has made grandiose claims about going behind Augustine to retrieve the doctrine (or, in the case of Catherine Mowry La Cugna, of going behind Nicaea!). Holmes demonstrates with conviction that this is false. The roots of the contemporary speculative anti-metaphysical and personalist reconstructions only go back to the thin soil of the Romantic age. He writes:

“The practice of speaking of three ‘persons’ in this sense in the divine life, of asserting a ‘social doctrine of the Trinity’, a ‘divine community’ or an ‘ontology of persons in relationship’ can only ever be, as far as I can see, a simple departure from … the unified witness of the entire theological tradition.” (195)

Holmes doesn’t say the emperor has no clothes (academics don’t typically engage in such grandstanding). But his justified indictment of recent Trinitarian theology certainly suggests the charge.

It should be stressed that Holmes is by no means an unthinking conservative who trumpets tradition for the sake of. Indeed, he remains open to theological revisionism insofar as it can be justified:

“The development of the doctrine of the Trinity took place in the context of an intellectual culture that was shaped by Greek philosophy, and it could be argued that this became determinative. However, the argument needs to be made; as far as I am aware it has not really been seriously essayed since von Harnack, even if it has been regularly assumed.” (198)

So don’t think of Holmes as prematurely shutting down theologies that dare to cross the boundaries into heterodoxy. Instead, he invites all to the table of theologically rigorous conversation.

This is a book of dizzying ambition, as it undertakes a survey of two millennia of Trinitarian theology in order to challenge a broad consensus that has emerged only in the last several decades. By and large Holmes succeeds while wielding in equal measure a sharp theological acumen, comprehensive historical theological knowledge, and an independence of thought which is able to challenge theological trends not from misbegotten iconoclasm but rather from a stronger and clearer grasp of the subject matter.

Along the way, Holmes offers many intriguing analyses and insights. For example, he trenchantly observes that Tertullian “succeeded — brilliantly — in clarifying the terms of the problem, but he has done no more than that.” (71) And he offers the following fascinating analysis of Irenaeus: “It is perhaps no surprise that Irenaeus, so long ignored, has been feted as a key Trinitarian thinker in the recent ‘Trinitarian revival’; his stress on the economy fits recent Trinitarianism far better than it did classical Trinitarianism.” (67) And while he is no fan of Eunomius, Holmes points out that the charge of rationalism is mistaken since “clarity can never be a defect in theological work.” (97) As a proponent of analytic theology I reply, yea and amen!

In fact, I found myself saying “Yea and amen” so often reading this book that my study began to sound like a Pentecostal prayer meeting. This is an outstanding work by a leading historical and systematic theologian, and it provides a novel contribution to academic literature even as it maintains its accessibility to the wider audience (caveat noted). In a marketplace crowded with books on the Trinity, many aiming for novelty and daring reinvention, Holmes reminds us that the best theological books are those written by highly educated, measured scholars who are independent of mind and not driven by theological fashion.