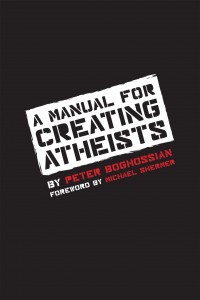 As some of you will know, I originally purchased Peter Boghossian’s book A Manual for Creating Atheists after Justin Brierley sent me a tentative invitation to debate with Boghossian on “Unbelievable”. When Boghossian then refused to appear on the program with me based on his insistence that I was not a scholar, I was left with a book I would never have purchased otherwise. So I determined that my twelve bucks would not be wasted. I would review the book for my blog.

Having listened to a couple interviews of Boghossian in which I found him to be obnoxious and ignorant, I anticipated that the book would be bad. When readers then sent me bizarre quotes from the book I adjusted my expectations: it would be really bad. Now that I’ve read the book I can say that Boghossian has plunged below even my basement level expectations. Apparently underneath the basement is a crawlspace — a dark, dank place that provides just enough room for the composing of angry, ignorant stream of thought screeds. A Manual for Creating Atheists comes from that dark place.

A crawlspace beneath a basement? Am I guilty of rhetoric run amok? Au contraire, dear Reader, to speak of this extended undisciplined blog-post as being the spawn of a subterranean abode of darkness and ignorance is to narrate its origins with restraint, if not charity.

The book gets off to an inauspicious start with Michael Shermer’s noxious, and yet aptly titled foreword, “Born-Again Atheist”. I say aptly titled because the description is surprisingly revealing as it conveys the tone of the work: this is a piece of brawling, fundamentalist evangelism, one that paints the world in stark hues of darkness and light.

Shermer aims to start us off with this bizarre caricature of Christian belief:

“God sacrificed himself to himself to save us from himself. Barking mad!” (12)

Apparently Shermer wants us to laugh about now. Something like this:

Okay, enough silliness. Let’s get serious for a moment. Why would Shermer caricature Christian belief like this? Why doesn’t he approach his intellectual opponents with a modicum of charity and care? In You’re Not as Crazy as I Think I discuss this temptation to marginalize others through the caricature of their views. I note that both atheists and Christians engage in this kind of ignorant behavior, and I take Christians to task for doing so. As I write:

“It is tempting to think that those who hold beliefs radically different from our own are just plain stupid. […] How shall we respond to our own incredulity? Should we just sit there, looking stunned at one another? One way to break the silence is through mockery or caricature. For instance, there certainly seems to be some caricature in Del Tackett’s description in The Truth Project  [a Focus on the Family curriculum] of the atheistic view of the human person as “imago Goo” (as opposed to imago Dei, or image of God). Although this is clearly a bald and uncharitable interpretation of the atheist’s position, it is rhetorically powerful when delivered to a receptive audience.” (89-90)

As Del Tackett mocks atheists as believing in “imago Goo” so Michael Shermer mocks Christians as believing that “God sacrificed himself to himself to save us from himself. Barking mad!” Just as Christians like Del Tackett justify the caricaturing of atheist positions based on the assumption that atheists are immoral, so Michael Shermer justifies the caricaturing of Christian positions based on the assumption that Christians are irrational. As he says, Christian belief “all sounds positively daft, but when you are in the religious bubble everything makes sense ….” (12)

It would appear that the fundamentalist categories that Shermer developed after becoming a “born-again Christian” (11) were faithfully retained and carefully cultivated when he became a “born-again atheist”. And since this foreword aims to set the tone for the book, presumably we can expect similar fundamentalist ignorance from Boghossian.

Our expectations shall not be disappointed.