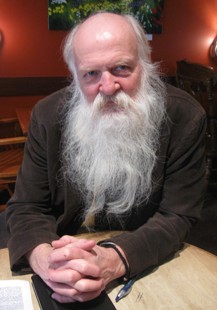 For its first three centuries, Christianity existed on the margins of Roman society. Then an event unfolded, the repercussions of which would echo down through history. Constantine, contender for the throne of the western empire, placed the Christian labarum on the shields of his soldiers and subsequently defeated his opponent Maxentius in October, 312. Having become the sole Emperor of the West by the divine hand, Constantine  returned the favor. Not only did persecution of Christians cease, but they were speedily ushered into the halls of power. The experience was overwhelming and led to Eusebius, a contemporary of Constantine, exulting that “the ancient oracle and predictions of the prophets were fulfilled, ‘and they shall beat their swords into plough-shares, and their spears into sickles: and nation shall not take up sword against nation, neither shall they learn war any more.'”

Except that nation continued to take up sword against nation. Only now they did it with God on their shields, or, in the case of the Nazis, with “Gott mit uns” on their belt buckles.

Today the empires of Christendom, like the once mighty civilization of Ozymandias, lie in ruins in the sand. As Shelley said, “Of that colossal wreck, boundless and bare / The lone and level sands stretch far away.”

We now live in a post-Constantinian age. With the church now disestablished, the shields (and belt buckles) of civil society remain blank. And no single religion is invited into the heart of western empire. But what does that mean for religion and society? Some people believe that the public square demands the removal of religion altogether. Consider, for example, the recent debate in Quebec over whether public civil servants should even be allowed to wear recognizable religious symbols like crosses and turbans. Others wonder whether this is merely a return to the church persecuted and marginalized by the state. Is there not room for a via media? Shouldn’t there still be a voice for religion in the public square?

In this episode of The Tentative Apologist Podcast we wrestle through these issues with David Goa, the Director for the Chester Ronning Centre for the Study of Religion and Public Life at the University of Alberta. David is a distinguished scholar who worked for over thirty years at the Royal Alberta Museum, and now as the Director for the Chester Ronning Centre, he brings his wealth of knowledge of theology, philosophy and history to bear on this and other important questions for our age. Our conversation ranged over several topics: gay marriage. the church and the military, and the prospect for a true symphonia between church and state.

To learn more about David you can visit Augustana College, University of Alberta.