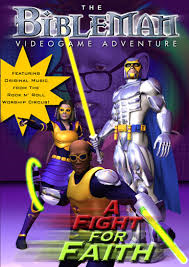 A few days ago Derek M drew my (and the collective “our”) attention to the following proposal from Peter Boghossian for inculcating atheist beliefs and values in pop culture, and in particular within children:

“Whether or not we can be successful in helping people see value in epistemological rigor is an empirical question. I have my own speculation that this can be accomplished through pop culture—for example, comic books and TV shows for children that personify new heroes, Epistemic Knights, and new villains, Faith Monsters.”

Omigosh. Is this fellow serious? Can you imagine a children’s program with “Epistemic Knights” fighting “Faith Monsters”? That silly proposal got me thinking back to the nadir of evangelical Christian children’s television programming. And no, I’m not thinking about Veggie Tales. Instead, I’m thinking about everybody’s favorite suburban evangelical super hero, Bibleman! Check out this awesome link!

My favorite part of the episode comes at 8:42 into the video when the one boy laments the children’s efforts to put on their own Bible show. He says, “God’s probably up there saying ‘Nice lame-o show, kids!” You have to wonder if the script writer included that line to express his own cynicism at a career spent writing scripts for Bibleman after his dream of working for Marvel Comics failed to materialize.

So will Bibleman be able to defeat Boghossian’s Epistemic Knights? Time will tell.