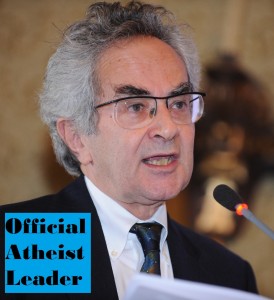 In my article “Can you be indoctrinated into atheism?” I distinguished between atheism simpliciter — that is, mere disbelief in God’s existence — and a robust, full-orbed atheism that seeks to articulate a comprehensive atheistic worldview. I observed:

The leaders of intellectual atheism from W.V.O. Quine down to Thomas Nagel have always been committed to rich metaphysical frameworks. Quine was a naturalist. Nagel has famously renounced naturalism as a failed quest while retaining commitment to a complex set of metaphysical desiderata. But regardless, not only are many atheists not atheists simpliciter. the intellectual leaders of atheism are emphatically not atheists simpliciter.

The mention of Thomas Nagel in this passage then elicited a comment from “Counter Apologist”. Now as I proceed, let me stipulate that Counter Apologist is a really fine fellow so my exchange should definitely not be interpreted as indicating any personal animus. That said, let’s jump into his comment:

“it’s almost sickening to hear you call Nagel an “intellectual leader of atheism”. You choose him over someone as esteemed as Dennett? Honestly it feels like many theists trot Nagel out because he’s an atheist that still holds to some kind of a metaphysic that theists find accommodating.”

I replied to Counter Apologist as follows:

Now that’s a revealing comment. I included Nagel for two reasons: (1) he is one of the world’s leading atheistic philosophers; (2) he explicitly eschews the naturalist project famously articulated by W.V. Quine.

Your strong language makes it sound like naturalism is proper orthodoxy for any self-respecting atheist, and that by daring to deviate from it Nagel has violated that sacred orthodoxy.

I didn’t realize that “free thought” is so narrow.

To which Counter Apologist replied:

Nagel is a respected philosopher who happens to be an atheist, but hasn’t done very much in the way of arguing for atheism – and is one of the few atheistic philosophers that holds to a metaphysic that closely mirrors that of most theists. He gets cited by theists because he’s one of the very few atheists that still holds to a metaphysic that is sympathetic to many theists.

There are plenty of very respectable atheistic philosophers and scientists who could qualify as intellectual leaders of atheism and no offense but leave the anointing to us atheists. Dennett, Pigliucci, Lowder, Carroll – all of them not only respected in their fields, but they’ve actually done quite a bit to actually advance atheism.

Whew! Now for some critical reflection.

Theists shouldn’t have an opinion on who the leading atheists are?

Before I turn to the main issue, I must address Counter Apologist’s directive that theists like myself don’t have a right to share our opinion on who the intellectual leaders of atheism are. As he says,

“no offense but leave the anointing to us atheists.”

As I understand this quip, Counter Apologist is claiming that only those from within a particular group of shared belief can properly recognize the intellectual leaders of that group.

Okay, now on to the main substance. Counter Apologist is incensed that Nagel should be considered a leader of atheism because Nagel allegedly “hasn’t done very much in the way of arguing for atheism”. But who decides that?

As I noted above, I don’t accept the claim that I am not entitled to an opinion in these matters. So allow me, if you will, to present some reasons why Nagel is, indeed, a leading atheistic philosopher.

First, Nagel is an outspoken atheist who has attained the status of full professor at New York University, one of the leading schools in the nation. This is reflective of his high distinction as one of the most important English language analytic philosophers in the world today. If I were an atheist, I’d be excited about that.

Second, Nagel has written a series of influential books — including The View from Nowhere (Oxford, 1986), The Last Word (Oxford, 1997), Secular Philosophy and the Religious Temperament (Oxford, 2009) and Mind and Cosmos (Oxford, 2012) — each of which wrestles with the most difficult philosophical problems including the nature of the mind, purpose, and meaning. In other words, he is thoroughly committed to the work of foundational philosophy, and of articulating a philosophical vision consistent with his convictions as an atheist. If I were an atheist, I’d be doubly excited about that.

Ahhh, but here’s where we run into trouble. You see, Nagel’s conclusions have often been at odds with the reigning view among atheistic philosophers, a position called “naturalism”. The tension became undeniable on the publication of Nagel’s most recent book, Mind and Cosmos where he concluded that naturalism is a failed project.

And that’s apparently what draws the ire of folks like Counter Apologist. As he complains:

“many theists trot Nagel out because he’s an atheist that still holds to some kind of a metaphysic that theists find accommodating.”

But what’s the problem exactly? Nagel is still a deeply committed atheist. So if his atheism overlaps more with theism than naturalism does, so what?

It is precisely at this point that we see the popular attempt to equate “atheist” with “free thought” is nothing more than blowing smoke. If you want to be an atheist in good standing, you better tow the party line of naturalism. Anything less is ceding ground to those damned theists, and we sure as hell don’t want that!

Folks, this is the same kind of petty tribalism that keeps Democrats and Republicans from working with one another. By dismissing any atheist who dares critique naturalism, Counter Apologist has become a company man, a mere bureaucrat in the state party, a “just tell me how to vote” functionary.

On the other hand, I see in Nagel a kindred spirit. With respect to my own belief community, I have never been interested in towing the party line as to what “Christian” is supposed to mean. And so on countless issues — e.g. creationism, eternal conscious torment, particular views of inerrancy, particular reading of the biblical violence passages, penal substitutionary atonement, and so on — I have freely differed from the “mainstream” tradition.

Sometimes this draws the ire of Christian party-line fundamentalists who roar that I’m not a true Christian because I’ve ceded ground to the atheists (or liberals, or whatever). (As I noted previously in this blog, some such party-liners even protested my tenure application a couple years ago, so this is real world stuff for me; it ain’t merely academic.)

And this is what folks like Counter Apologist are doing for atheism when they reprimand any atheist who dares to venture beyond the borders of the party line of naturalism.

And for those reasons he gets my vote.

(Even though theists apparently don’t get a vote.)