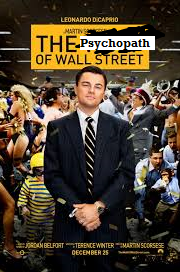 I haven’t watched Martin Scorsese’s new film “The Wolf of Wall Street”. Nor do I intend to.

Consequently, you might think it a bit presumptuous of me to opine — and with such moralizing forcefulness! — on a film I haven’t yet watched. What gives?

Well let’s start with the premise. The film stars Leonardo DiCaprio as Jordan Belfort, a stock trader who got filthy rich in the 1990s ripping off unsuspecting investors and then blowing the money on cocaine, prostitutes, yachts, and anything and everything else to fund his debauched lifestyle. Ultimately, Belfort was caught and sentenced for his crimes in 2003. And he spent 22 months in jail for destroying the lives of countless people.

Oh, yeah and he was ordered to pay back more than $110 million to defrauded investors. Good luck with that.

After he was released from prison, Belfort became a motivational speaker and wrote his putrid narcissistic self-portrait The Wolf of Wall Street (Bantam, 2007).

And that’s a point on which I want to reflect for a moment.

Let’s go back to autumn 2006 when the public was shocked to learn that O.J. Simpson had written a book coyly called If I Did It in which he describes a “hypothetical” scenario (nudge nudge, wink wink) in which he describes killing his ex-wife Nicole Brown Simpson and her friend Ron Goldman. The response was swift. The public was absolutely appalled that this creep would have the audacity to write a book and think he could make money off of his crimes.

Belfort didn’t kill anybody, but he certainly did victimize untold numbers of people. Imagine for a moment that your lonely grandmother receives a call from a very kind gentleman claiming to be her long lost nephew. Within a couple weeks he’s cleaned out her bank account. And he’s done this many times before to many other grannies. A couple years later after he’s been sentenced for his crime and served his twenty two months, would you buy his cheeky memoir?

Now substitute a different method for defrauding people and give the scammer a suit. Has anything changed? Would you now want to read his cheeky memoir?

For all the superficial talk about the rage of the 99%, we still live in a world in which Simpson’s garbage is shunned while Belfort’s garbage is published.

And would you go to the film version of If I Did it? Would you like to see Will Smith play O.J. in this “hypothetical” scenario? Of course nobody would countenance something so disgusting. And yet Martin Scorsese and Leonardo DiCaprio think it is just wonderful to make a movie based on a psychopathic stock trader’s cheeky memoir.

The optimists among you might be holding out hope that the film takes a harsh view of Belfort and his crimes. Well consider: Slate Magazine published an article today (which originally appeared in Business Insider) titled “We Saw “The Wolf of Wall Street” With a Bunch of Wall Street Dudes and It Was Disturbing“. The writer attended a screening a couple days ago near Wall Street and the theater was full of Wall Street bankers and stock traders. He observes,

my one major gripe was pretty simple: Jordan Belfort defrauded a lot of people—and by the nature of his penny stock transgressions, many low-income people—out of a ton of money. He then used that money, as one does, on cocaine, hookers, cars, and yachts. It may be great cinema to document his exploits, but there’s a fine line between satirizing Wall Street’s excess and celebrating Belfort’s lifestyle.

The writer then observes that the audience was cheering for Belfort in the film. To them, the psychopath was clearly the hero.

This film may play well on Wall Street, but not surprisingly it isn’t doing as well on Main Street. According to Cinemascore, its cinemascore rating is an abysmal “C”. That means that the general consensus of movie goers leaving the cinema is a shade above loathing.

That’s one bit of good news. But the fact that a piece of garbage like this is made at all shows how far we haven’t come in our understanding of white collar crimes and those that commit them.