Check out this newly released video which features a long poem courtesy of John Piper, and then let’s talk:

The interesting thing is that while this video is titled “The Calvinist”, and thus presumably aims to offer a portrait of theology that is uniquely Calvinist which is then worked out in the life of the individual, there is nothing particularly Calvinist about it.

To be sure, there is much that is suggestive of Calvinism. The male figure with his beard, leather-bound journal, and flat cap looks to me like a Calvinist.

So does the patriarchal tone of the whole video complete with narration provided by a gaggle of old white males (including D.A. Carson, R.C. Sproul, and Piper himself).

The scene of the guy disputing with some poor pagan (or Arminian) also has a ring of Calvinism, especially with the complementary line:

“See him in dispute, firm and resolute”

Calvinists are famous for their ability to dispute, firm and resolute. Just don’t mention non-Reformed readings of Romans 9 … unless you want him disputing for the next five hours.

But the most Calvinistic sounding bit of the entire, five minute video, probably comes with this line:

“man will have his skills if the Father wills”

Here we get a nod to the divine sovereignty. But even so, there is really nothing particularly Calvinist about this confession. Arminians also believe that any state of affairs or event which obtains (including the skills possessed by a particular flat cap wearing fellow) only obtains because God has, in some sense, willed that it occur, either by his active or permissive decree.

So why is this video called “The Calvinist”?

I don’t have a good answer to that question. 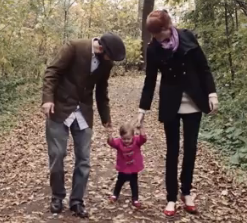 However, I can suggest a reworked video which is better at highlighting unique Reformed distinctives. Let me point out just one suggested change.

In one scene the flat capped new Calvinist is walking with his wife and toddler as the narrator observes:

“See him with his child. Has he ever smiled such a smile before, playing on the floor?”

It’s a heart warming scene. Unfortunately, Arminians can smile and play on the floor too. What is more, they believe that God is omnibenevolent, such that he loves all creatures equally.

Of course, this is precisely what Calvinists don’t believe. Instead, they believe that God has a special love only for his elect and it is in virtue of this love that he saves the elect, while willing (through active or permissive decrees) that the non-elect be damned to serve as objects of wrath to illumine his greater glory.

With that in mind, I’d suggest reworking the scene like this. Child playing with building blocks while father looks stoically on. The narrator observes:

“See him with his child. If she be damned, still his heart will sing, because the inscrutable will is a beautiful thing.”

Piper basically said as much in a well known passage:

“I am not ignorant that God may not have chosen my sons for his sons. And, though I think I would give my life for their salvation, if they should be lost to me, I would not rail against the Almighty. He is God. I am but a man. The potter has absolute rights over the clay. Mine is to bow before his unimpeachable character and believe that the Judge of all the earth has ever and always will do right.”  (Cited in Jerry L. Walls and Joseph Dongell, Why I am not a Calvinist, (InterVarsity, 2004), 162)

Note: I will publish a follow-up article tomorrow in which I offer a fuller rebuttal to this final Piper quotation.