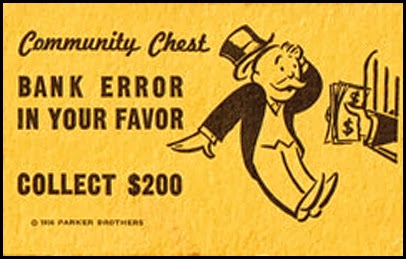 One of the favored pastimes of the holidays is playing the board games that don’t get played any other time of the year. The other day my daughter pulled out Monopoly, blew the dust off the cover and set the game up.

Having played Monopoly 50,000 times in my youth, I know all the Community Chest and Chance cards well. And so when I landed on Community Chest and flipped the card, I was pleased, but hardly surprised, to see that the bank had made a mistake and I’d be receiving $200. Ain’t nothin’ like free money!

Then my conscience set in. I can’t accept this. It was given to me in error. I wanted to return it to the bank.

Alas, the rules of the game didn’t allow for me to return the funds. And so we continued to play, with me $200 richer.

The incident brought to mind a case from close to twenty years ago when I withdrew forty dollars from the automated teller and the machine spit out one $20 and one $50.

Oh yeah! That was the first and only time I came out ahead playing the bank machine. Every other time I’ve broken even. Which is, I take it, the way it is supposed to be.

But I was an honest soul, so I marched into the bank and told the teller the machine had given me a $50 by mistake, and could I please exchange this $50 for a $20?

She looked at me like I was insane. After consulting with her manager she returned and gave me a $20. She offered no thanks. Not even a complimentary pen. Just a $20 bill and a “You really are a moron!” look of disdain.

Regardless, I never regretted doing the right thing that day. Not one bit.

Even so, I must admit I am rather pleased that the rules of Monopoly don’t permit the return of a bank error.