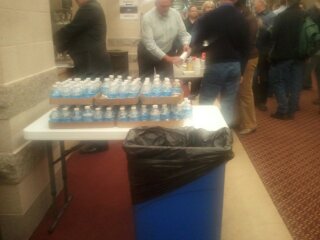 On my twitter feed (which you can subscribe to here) I refer to myself as an inactive activist for social justice. Sadly, it’s an apt description. I’ve found it is much easier to adopt a label than live out the reality behind it. (I am also a burger-eating vegetarian and a gun-toting pacifist.) (Okay, I don’t actually tote a gun, but you get the point.)

In recent years I’ve noted a number of evangelical churches beginning to embrace the cause of environmentalism. It is exciting to witness evangelicals beginning to green the Gospel … except that often it remains merely at the level of proclamation.

On my recent trip to Baltimore I spent one evening at a local suburban megachurch which was hosting its own conference. In the foyer I took this picture of a hundred little water bottles piled up for attendees. This must surely be one of the most wasteful ways conceivable to get a cup of water. And to top it off, there was a garbage can at the ready to send the empty bottles of momentary refreshment to a landfill for the next several eons. (Yes, it is a blue bin, but a glance inside revealed banana peels, wrappers, and other garbage intermingled with the empty bottles. Clearly the perception of the attendees is that this was not a recycling bin.)

Yes, evangelicals have begun speaking of environmental justice. But now it is time to start walking the walk. And finding an environmentally responsible way to satiate the thirst of your conference attendees would seem to be a great place to begin.