One of the first responses to my newly posted interview with Craig Keener came from Mike D who commented: 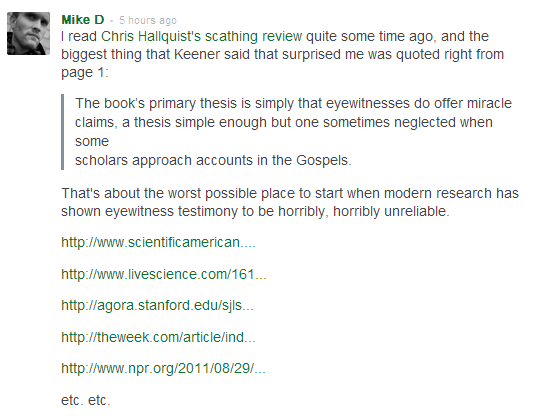 Mike then simply rehashes David Hume by asserting that it is always more likely that an eye-witness is errant than that a miracle occurred. Never mind that Craig Keener offers an extensive rebuttal of the Scottish skeptic: my daddy says if Hume says it, it’s so. (A seasonal allusion to Virginia’s famous letter, in case you didn’t pick it up.)

Yeah, I know, Hume’s offering testimony. But Mike likes this testimony, so I guess it’s okay.

Testimony skepticism principle (TSP): Carefully documented testimonial evidence has negligible evidential value because testimony has been shown to be unreliable.

But I’m quite sure (that is, I’m charitably assuming) that Mike doesn’t really follow this principle consistently.

Example 1: Mike and his buddy are trying to find the Paramount Theater where Mike’s favorite band, Nickelback, is performing. (Yeah, Mike claims to like real heavy metal bands. But secretly he’s the biggest Nickelback fan. Heh heh.) Unfortunately Mike gets lost, so he pulls his Pontiac Aztek over to the side of the road as big hot tears begin to roll down his cheeks. “It’s okay Mike,” his buddy says. “I’ll get directions.” Mike’s chum then goes out and asks a couple intelligent looking people in the neighborhood for directions to the Paramount. Each gives clear, detailed instructions and they are in agreement. Mike’s friend comes back and hands Mike the instructions. “It’s no use!” Mike wails. “That’s about the worst possible place to start when modern research has shown eyewitness testimony to be horribly, horribly unreliable. I guess we should just go home.”

Example 2: One day Mike gets into a debate with Alice. While Mike claims the exceedingly rare purple peppered parrot lives only in the highlands of Borneo, Alice insists they also live in the highlands of Sumatra. So Alice says, “I’ll settle this debate forthwith,” and she pulls down the latest edition of The Journal of Parrot Studies. “Read the second article,” Alice snaps. Mike opens the journal and sees the title: “Evidence that the Purple Peppered Parrot lives in the Highlands of Sumatra.” Now Mike’s nervous. His eyes skip down to the abstract and he reads: “In this study we documented extensive reports from indigenous hunters of the Sumatra highlands who report witnessing a bird that fits the precise description of the purple peppered parrot.” Mike chuckles with relief. “Is that all you got? Don’t you know that that’s about the worst possible place to start when modern research has shown eyewitness testimony to be horribly, horribly unreliable?” With that Mike high-fives himself and begins playing the latest Nickelback CD.

As I said, I’m charitably assuming Mike doesn’t consistently follow this principle. But on the downside, that suggests that he only applies his TSP when there are claims that differ from his assumptions about the way the world is, as miracle claims clearly do.

If I didn’t know better I might think that the “D” in “Mike D” is for “Dogmatic”.

Think about it. Sense perception has also shown to be “horribly, horribly unreliable”. But the answer is not to blind your eyes and deafen your ears. Rather, it is to proceed with a skeptical caution and take the deliverances of sense perception as fallible and provisional. Mutatis mutandis for testimony. (And rational intuition. And memory. And all other sources of belief.)

So while Mike purports to offer a reasonable skepticism, all he really offers is a dogmatic, irrational chestnut.

Perhaps in good seasonal spirit, he might try roasting it on an open fire.