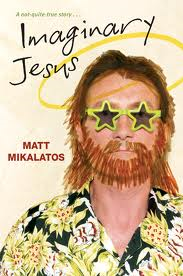 Many of us engage in pastimes which can be dangerous to our health, things like lion tamer, meth smoker, or race car driver. But from a Christian point of view, one of the most dangerous pastimes is making Jesus into our own image, for this practice can lull people into a false sense of security concerning their spiritual health … with potentially eternal consequences.

Despite these dangers, the practice of fashioning personal Jesuses is fairly ubiquitous. To note one famous example, George Tyrell memorably described theologian Adolf von Harnack’s christology as follows: “The Christ that Harnack sees, looking back through nineteen centuries of Catholic darkness, is only the reflection of a Liberal Protestant face, seen at the bottom of a deep well.” But lest we spend the afternoon snickering at Harnack, how often are our Jesuses little more than slightly retouched images of ourselves?

That sober question is at the heart of Matt Mikalatos’s new book Imaginary Jesus (Barna, 2010). A former writer for the wryly satirical “Wittenberg Door”, Mikalatos’s skills shine in this imaginative romp through the streets of Portland, Oregon and the inner recesses of Matt’s own complex relationship with Jesus.

The book opens with Matt hanging out with Jesus at the “Red and Black Café” (a real bohemian coffee shop in Portland). To get a sense of the book it is best to have an extended quote from the opening scene:

I was sitting by the round table with the chessboard painted on it, and Jesus was sitting across from me, his legs crossed and one sandaled foot bouncing to the music. I had my Bible open in front of me but sort of pushed behind a notebook so no one could see it.

Jesus had just put his earbuds in when the waitress brought me my vegan chilli. This is the price you pay to be cool in this town. I took a bite, wished it had some meat in it, and poured as much Tapatio into it as I could stand. As I stirred the taste into my food, I realized that the worst possible thing had happened. They had forgotten my chips.

“They forgot my tortilla chips.”

Jesus tossed his fair back and pulled an earbud out. “What was that?”

And so begins the adventures of Matt Mikalatos and Jesus. It doesn’t take long for the reader to figure out that the Jesus hanging out with Matt at the Red and Black is not the real Jesus, but one of innumerable idols Matt (and each one of us) substitutes on a fairly regular basis. (That revelation comes around the same time that the real Apostle Peter enters the cafe and punches this imaginary Jesus in the face.)

Yes, this is a rather unconventional book which takes the reader through literally dozens of imaginary Jesuses. And many of them are a rather disconcerting look inside the closeted idols of many of us. (Although it is interesting to note that I didn’t find my own head-banging metal core Jesus among Matt’s motley crew. Maybe that one’s okay after all.)

Perhaps the single most memorable vignette in the book features Matt sliding on an inner tube down the snowy side of Mount Hood with three imaginary Jesuses: Meticulous Providence Jesus, Free Will Jesus and Can’t-See-the-Future Jesus. Each of these Jesuses offers a different response to Matt’s immediate plight on the tube as well as the problem of evil more generally (and ultimately to the untimely death of Matt’s child which, I take it, is one of the real autobiographical bits in the book).

And this brings us to an important nuance. These three Jesuses on the tube are not completely out to lunch. There is a lot of truth in them. Even if some Jesuses are complete fakes (e.g. the “God hates fags” Jesus), others are a complex and subtle mixture of truth and error and demand appropriately nuanced responses.

As I see it, the book is two parts spiritual formation, one part theodicy, and a whole bunch of Matt Mikalatos. He is a very engaging writer and the kind of guy who you know you would have a great time with, hanging out at the Red and Black Café, griping about the vegan chilli, and sharing touchpoints of the evangelical ghetto subculture (like the Johnny Cash Christian comic book that Matt references).

My hope is that, in the dreary landscape of the Christian bookstore crowded with bestsellers on unintentionally imaginary Jesuses by certain authors who will remain unnamed, readers will discover Matt’s Imaginary Jesus. The cost is only $14.99, but the humorous and piercing lessons contained therein? Priceless.