Over the last few days I’ve been in Baltimore at the Evangelical Theological Society annual conference. While ETS just wrapped up last night, this evening the American Academy of Religion and Society of Biblical Literature begins (fortunately at the same venues). Thus far I’ve been intrepid with my microphone and have recorded eight — count ’em, eight! — interesting interviews with important scholars like Paul Copan, Michael Licona, Robin Parry and Yoram Hazony. Over the next few days I have a few more interviews scheduled and will be releasing them over the next couple months in the podcast. So the short of it is: stay tuned.

Now what follows is my first of a series of snapshots offering reflections on the conference and my experience in Baltimore. 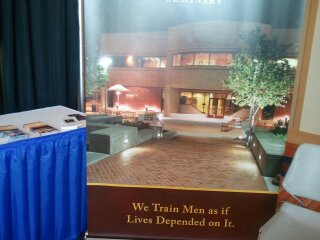 Let’s start in the display area. Evangelicalism is a diverse community (if it even qualifies as a “community”), and one strand of that community is complementarianism. This is the view that while women are equal to men, certain roles in the church and home are restricted to men and others to women. In traditional complementarianism, church leadership positions are restricted to men. Of course, mainstream Roman Catholicism represents a complementarian position, but it is also found in some Protestant traditions, perhaps nowhere more explicitly than here, at John MacArthur’s Master’s Seminary:

“We Train Men as if Lives Depended on It.”

Did you hear that? Men. Not women. Men! (I guess the gals don’t need seminary training to teach Sunday school and prep for the church potluck.)

Not to worry, the “Christians for Biblical Equality” were also well represented, albeit at the opposite end of the display hall!