A few weeks ago I was interviewed on The Storymen Podcast with JR. Forasteros, Clay Morgan and Matt Mikalatos. You can check it out here. They started out by vetting me for my geek credentials and I passed the test but just barely by sharing my childhood interest in Archie comics and especially the wonky Spire Christian comics illustrated by Al Hartley that came out in the 1970s. 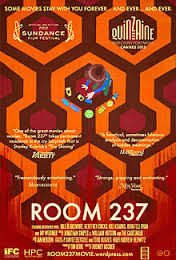 In retrospect I would have done better to play The Shining card. You see, I’m a big fan of Stephen King’s book The Shining and even more of Stanley Kubrick’s masterful 1980 film. Indeed, I am such a fan of the film that my wife and I stayed at “The Overlook Hotel” (aka The Timberline Lodge on Mount Hood) back in 1999. (I was disappointed to learn, upon arrival, that the hotel was merely used for certain external shots. Most everything else was filmed on a sound stage in London. And the cavernous interior of The Overlook Hotel bore no relation at all to the cramped frontier accommodations available at The Timberline.) Earlier this year I confirmed my Shining-geek credentials by watching the fascinating documentary “Room 237” which considers five crazy interpretations of the film by superfans. To be honest, I found the documentary a bit disappointing as I realized that it was more about the nature of obsession than the meaning of the film. I want to know what the film means, not embark on a meandering exploration of the obsessive human mind.

So yeah, I suspect I have sufficient geek-cred even though I don’t care for Star Trek or Star Wars or online video games (or any other kind of gaming) or superhero comics (or films) or Buffy the Vampire Slayer or whatever else most geeks like. And I don’t even need to play my Spire Christian comics card to qualify.

Sorry, that was a big digression. Bottom line, this was a unique interview that focused on my new book on heaven by three heavyweights of what I can call quirky, progressive, culturally savvy Christianity. The geek test was merely the wardrobe door into a Narnia of engaging conversation.

I was especially interested in doing this interview since I have a bit of history with The Storymen. In 2010 I reviewed Matt Mikalatos’ first book for The Christian Post. (In recognition of this auspicious interview, I will be reposting that vintage review in my blog tomorrow!) And then a couple months ago I interviewed Clay Morgan in my blog on zombies and theology. (You can read it here.) As for JR. Forasteros, I’m going to post an article on this cool pastor in a few days to complete my triumvirate of engagements with The Storymen.

For now check out the interview and their admirably quirky podcast.