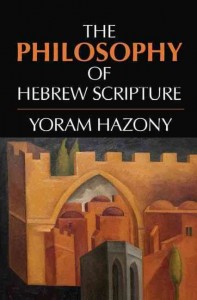 Yoram Hazony’s book begins with a question: “Is there something crucial missing in our understanding of what the Hebrew Bible is all about?” (ix) His answer, as you might have expected, is yes. But the nature of the answer is something you might not have anticipated. According to Hazony, the problem is that we think of the Bible as works of revelation rather than reason. It is not that Hazony denies the Hebrew Bible is a work of revelation (although the confession of revelation begs for definition). The problem, rather, is that the confession of the book as revelation has obscured the fact that these works were (and are) first and foremost works of philosophical reasoning.

Yes indeed, Hazony wants us to consider the Bible as a collection of works of reason.

The idea receives immediate resistance from the underlying assumption that the Bible fits first and foremost into the category of putative revelation. After all, the very essence of revelation is “miraculous knowledge, to be accepted in gratitude and believed in faith.” (1) How can a divine dispensation of supernatural insight be reconciled to a carefully wrought result of human ratiocination?

This conceptual opposition between reason and revelation creates a zero sum game according to which the more revelatory the Bible is, the less reasonable it becomes. Since the Enlightenment the opposition has been heightened even as the credibility of the Bible as revelation has been undermined and its exclusion from the academy secured. This exclusion was spurred on by several factors including the Enlightenment decision to view the works of the Greeks as paradigmatic of philosophical reason, a German-sourced anti-Semitism that desired to exclude Hebrew thought from the canons of rationality, and a source-critical approach to the texts that cast a pall over the final received forms and any philosophical conclusions that might be drawn from them.

Hazony does not focus on challenging the standard assumptions that a revelation cannot be a work of reason. But he does challenge the notion that the Bible does not constitute works of reason. We can consider his approach by focusing on what is commonly assumed to be a paradigmatic example of revelation: the prophet who purports to speak for God himself. Since the Hebrew prophets declare “Thus saith the Lord,” it is assumed that they are clearly engaged in works of revelation to the exclusion of reason.

The assumption is false. Hazony points out that the ancient Greek philosophers who were contemporaries of the Hebrew prophets spoke in similar terms. To note one glaring example, the great Greek philosopher Parmenides prefaces his philosophical disquisition with the description of his ascension into the sky to receive revelations from a goddess. And yet, this ethereal prologue was never considered to be grounds to exclude Parmenides from the canon of philosophy because the Enlightenment had decided to recognize the Greeks as paradigm examples of the discipline. Nor is Parmenides exceptional. Hazony points out that similar language is found in other Greeks including Empedocles and even Socrates himself who freely describes “revelations and commands and dreams from the gods that give form and content to his life and work.” (8)

But when it comes to the Hebrew prophets the invocation of the deity is assumed to negate the work’s philosophical pretensions. And if the work is produced by ecstatic revelation rather than reflective reason, then the product will presumably lack philosophical profundity. But this is a prejudicial assumption and Hazony shows it to be false. In chapter 6, “Jeremiah and the Problem of Knowing,” he provides an erudite exposition of the book of Jeremiah as a lucid philosophical meditation on the nature of knowledge set against the backdrop of the social crisis created by the fall of Jerusalem. Other chapters extend the philosophical analysis beyond the prophets as in Hazony’s reading of the Deuteronomic history as a treatise of political philosophy in narratival form (chapter 5), the contrast between a Hebrew conception of truth as participation and the Aristotelian notion of truth as correspondence (chapter 7), and the Hebrew rejection of the opposition of reason and faith that traces in large part to the influence of Christian theologian Tertullian (chapter 8).

If there is any aspect of the conception of the Bible as revelation that seems inimical to the spirit of philosophy, it is the assumption that one simply submits to a revelation without question. This submissive spirit contradicts explicitly the philosophical mind which dares to ask why and to render an opposition to that which contradicts the surest deliverances of reason.

Here too Hazony insists that the zero sum game is false, for the Bible doesn’t in fact teach this “ethics of submission”. Instead, a careful reading of the Deuteronomic history finds the type of the shepherd elevated as the paradigmatic ideal. The shepherd embodies “a type of individual, and a type of society, that is willing to forsake the might and riches of the great civilizations for the sake of personal freedom and the hope of something higher” (60). While the shepherd is willing to challenge the state, he is also willing to challenge God himself, including the perceived justice of God’s actions, as when Abraham challenges God’s intention to destroy Sodom (69) or Moses challenges God’s decision to destroy Israel (69-70). Hazony takes this classic type of the shepherd (extending back to Abel) as communicating to the reader that

“the God of Israel loves those who disobey for the sake of what is right, and is capable of being pleased when a man has used his freedom to wrestle with him and to prevail, so long as the path on behalf of which he struggles ultimately proves to be the right one in God’s eyes.” (138)

Ironically, the ideal of the shepherd calls to mind the same independent spirit of rational and moral reflection that new atheists like Christopher Hitchens have codified under the rubric of “antitheism”. Hitchens insisted that the antitheist stands against the actions of a God he perceives to be unjust. But this looks remarkably like the shepherd who dares to challenge perceived divine injustice. Of course, the shepherd does not ultimately reject God, but the Hebrew tradition is defined by the room to question the way God is depicted set against an innate sense of justice.

Hazony’s book opens new avenues to conceive of scripture as a bold and eminently rational tradition of critical reflection. But even as it does so it also raises a battery of questions (as all great books do). Some of those questions are owned by the Christian tradition. As a Jew, Hazony doesn’t have much interest in exploring a continuity between testaments. Indeed, after reading the book one gets a sense that the real zero sum game exists between the Hebrew scripture of reason and the New Testament of revelation and divine miracles.

While there is certainly some tension here (consider, for example, the way the prophets used parables as a tool of understanding versus Jesus’ occasionally subversive use of parables as a veil to understanding). At the same time, Tertullian doesn’t own the Christian tradition. First Corinthians may begin with a nod to the contrast between Christ and human wisdom, but it still is a masterfully argued document on any objective measure. And even Luther himself who showed so much impatience to the Scholastic brain trust could begin his Worms address, “Unless I am convinced by Scripture and plain reason…”

The book presents other challenges that are owned by anyone keen to claim the Hebrew scriptures of reason as putative candidates for revelation. For example, Hazony presents the Law not as the bequeathal of inexplicable divine mandates, but rather as the best of humanly derived jurisprudence in the ANE. Consequently, the value of the Law is borne out evidentially as those who live according to its dictates naturally flourish. But what do we do when the law is not one we delight in for its wisdom but rather one by which we are repulsed for its brutishness? (And I know of no other way to describe legislation advising stoning or amputation than as inhumane and brutish.)

The good news is that Hazony’s vision of the Hebrew scriptures as a tradition of open enquiry rather than fixed revelation allows ample room for various appropriations of the contents of the Law and other troubling aspects of the texts. But in acknowledgement of those committed to viewing this grand collection of ancient Hebrew philosophical wisdom as in some sense revelatory and authoritative, I’d say the author owes us a sequel.

You can purchase The Philosophy of Hebrew Scripture here.