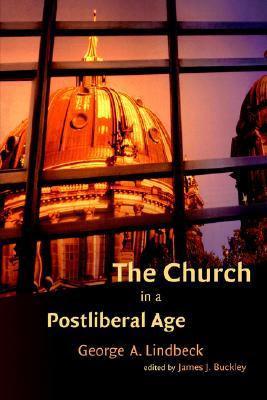 In the last thirty years the deep division between “liberals” and “conservatives” has been challenged by a growing number of “postliberal” theologians, perhaps most notable of which has been Lutheran George Lindbeck. Now James Buckley has edited the Lindbeck reader The Church in a Postliberal Age to provide an introduction to this important theologian’s thought. However, Lindbeck’s theology is more than postliberalism, and so Buckley has divided the readings into three categories: evangelical, catholic, and postliberal. Further, he has included an introductory essay to Lindbeck’s theology, as well as introductions to each of the three sections and to each individual reading. In this review I will consider one sample essay from each section.

Part I “Evangelical” focuses on Lindbeck’s fidelity to the three Reformation solas: Christ, faith, and scripture. In this context, the essay “Unbelievers and the ‘Sola Christi‘” seeks to affirm the unique role of Christ in salvation while avoiding an unqualified soteriological exclusivism. In the essay Lindbeck provides a friendly critique of Karl Rahner’s concept of implicit faith and “anonymous Christians” via the Lutheran stress on the fides ex auditu. In other words, we ought to maintain the conscious decision if at all possible. This brings Lindeck to endorse a post-mortem offer of salvation for those who have never heard. While the essay is speculative and lacking in sustained biblical interaction, it is not unbiblical , and Lindbeck’s thoughtful engagement with Rahner from within the Lutheran tradition is commendable.

Part II “Catholic” includes writings which highlight Lindbeck’s commitment to the church universal. Within this context, Lindbeck pursues a fascinating interaction with Orthodox spirituality in “Hesychastic Prayer and the Christianizing of Platonism: Some Protestant Reflections.” Hesychastic prayer involves continually repeating a short prayer in order to facilitate a mystical experience of union with Christ. The practice may worry some Protestants for its lack of biblical precedent, platonic roots, and inward orientation. However, Lindbeck defends the practice by emphasizing its holistic, and ultimately Christocentric bodily focus. The concept of deification on which it builds may be alien to Protestants but, as Lindbeck hopes, the practice may yet yield ecumenical fruit (Hesychastic prayer meets the charismatic movement?!).

In his most well known book The Nature of Doctrine, Lindbeck proposes that theories of doctrine are tied to theories of religion. Cognitive-propositionalism identifies doctrine cognitively with reference to its referential/realist role; experiential-expressivism interprets doctrine as personal/subjective; Lindbeck’s own cultural-linguistic theory interprets doctrine as fulfilling a communal, grammatical role. Part III “Postliberalism” explores this most familiar and controversial dimension of Lindbeck’s theology. In the reading “Toward a Postliberal Theology,” (the final chapter of The Nature of Doctrine), Lindbeck interprets the dogmatic, practical and apologetic dimensions of theology in accord with the cultural-linguistic theory. Postliberal theology seeks faithfulness not through reflection on propositions or experience, but by subjecting both to scripture. Practically, the cultural-linguistic approach focuses not on propositions or experience but on current situations which anticipate the future kingdom. And this theology is intelligible not because it demonstrates propositions to be correct, but because it provides occasional and contextual responses to objectors. This selection highlights the postfoundational and contextual role of Lindbeck’s theology. However, left unanswered are two common objections: first, that Lindbeck has caricatured both conservatives and liberals to strengthen his own position, ad second that his ambivalence to the referential role of doctrine leads to theological antirealism where the Christian community makes doctrines “true”.

This type of book can be assessed both with respect to the success of the editor in providing a useful and faithful introduction to the subject’s writings, and the intrinsic value of the writings themselves. As regards the first point, Buckley has succeeded in providing an interesting representative sampling of Lindeck’s writings, supplemented with helpful introductions. My main criticism is that Buckley’s three sections are somewhat arbitrary (there is significant overlap in the content of the readings in the three sections).

As regards Lindbeck’s theology, opinions will likely be mixed. There is a great irony that for all his postliberal emphasis on the text, the whole text, and nothing but the text (and nothing outside the text), there is little biblical exegesis undertaken in these writings. Further, while Lindbeck and other postliberals have somewhat clarified their relation to realism (with help from astute commentators like Bruce Marshall), Lindbeck’s final stance on the truth-makers of doctrine remains unclear.

I would suggest that (at least for evangelicals) the real value of this book, and Lindbeck’s work in general, is two-fold. First, it is a model of creative ecumenical theology which seeks to develop one’s own “radical tradition” while finding common ground with catholic Christianity. Second, Lindbeck’s postliberal position is close enough to evangelicalism to sustain a deep conversation, and distant enough to challenge the somewhat parochial evangelical universe. (How many evangelicals have theologically assayed hesychastic prayer?!) Lindbeck’s is an important voice in contemporary theology, and this book provides an excellent introduction to his writings.

This review was originally published in Canadian Evangelical Review.