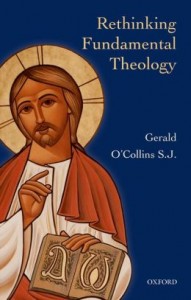 In this wide ranging volume O’Collins seeks to lay out a program for relaunching fundamental theology. He certainly is qualified for the task given that this is his fourth book on the topic. Over thirteen chapters O’Collins covers a wide range of issues including introducing fundamental theology (chapter 1), God (chapter 2), anthropology (chapter 3), revelation (chapter 4), Jesus (chapters 5 and 6), faith (chapter 7), tradition (chapter 8), the Bible (chapters 9 and 10), the church (chapter 11), Christ and other religions (chapter 12) and theological style and method (chapter 13).

Given the wide ranging nature of the book it is inevitable that O’Collins will be somewhat selective in his treatment of topics. Even so, an author of a book like this is bound to be charged with oversights. On that score I’ll lodge my complaint that O’Collins only dedicated a page to discuss metaphor and the nature of religious language (335-6). Given the enormous attention this topic has received in contemporary theology, this seems a significant gap.

Wide-ranging books of this sort also provide fertile soil for reviewer quibbles. On that score I shall avail myself of the privilege of lodging a few of my own. To begin with, I note my dissatisfaction with O’Collins’ endorsement of reduplicative predication in Christology without even acknowledging the serious concerns that such formulations are quasi-Nestorian.

Other quibbles are directed at suggestive points that remain underdeveloped. To note one example, while O’Collins unapologetically affirms biblical authority and inspiration, he senses no need to exonerate the problematic moral perspectives present in scripture, be they in the imprecatory psalms (220) or Israel’s holy wars (242). While I agree with this general approach to these texts, O’Collins leaves the reader wishing he would explain more fully the role he sees these texts playing in an inspired canon.

O’Collins leaves the reader wishing for more clarity in other areas as well, and some of them are significant. For example, while O’Collins affirms the post-resurrection appearances, he qualifies that “This is not to suggest that when the risen Jesus appeared he was an exterior object to be perceived and recognized by anyone who happened to be present, irrespective of their personal dispositions.” (151) A layperson may be forgiven for worrying that this is theological doubletalk for a denial of the resurrection. Consequently, O’Collins should explain more fully what he means here.

This leads to another concern. O’Collins frequently refers to the role fundamental theology plays in providing justification for various theological claims (for example, see 97). However, this leaves him vulnerable to the subordinationist charge that he has made theology subject to an external source of justification. To take one example, O’Collins lists five criteria for determining the authentic sayings and actions of Jesus. (100) He seems to view these criteria as a necessary grid to determine which gospel passages Christians can reasonably accept as historical (102). However, not only is the veracity of some of these criteria questionable (the criterion of discontinuity, in particular), the deeper issue concerns why a Christian cannot accept the gospels in their entirety as historical absent defeaters to that historicity.

My final quibble focuses on chapter 13 where O’Collins describes three approaches to theology as science, ethics (or social justice) and worship. While O’Collins argues rightly that we need all three styles, he then suggests that these three styles correspond to correspondence, pragmatic and coherence theories of truth. This is a case of over-stylizing your argument. Theories of truth are totalitarian in that each admits to no rivals. If a statement is true because it corresponds to reality (as is surely the case) then it is not true because it has pragmatic value or coherence.

As I said these are quibbles and whatever the weaknesses of Rethinking Fundamental Theology, they are far outweighed by the strengths. O’Collins’ discussions of topics like revelation, inspiration, ecclesiology and Christology are nuanced and, in the best reflection of a post-Vatican 2 world, generously ecumenical. (Indeed, the final word in the final chapter comes courtesy of Martin Luther.) This is an enjoyable and challenging book and it deserves a wide readership.