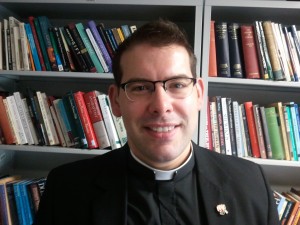 This time on The Tentative Apologist Podcast we are joined by Father Matthew Hysell, who was ordained one year ago as Canada’s first deaf Catholic priest. After a bout with meningitis as a toddler, Father Matthew lost all hearing in one ear and is now only able to hear in the other with a hearing aid. Though he was born and raised in a Baptist home, at a young age he felt the call to the Roman Catholic Church.

Born and raised in the United States, Father Matthew completed two graduate theological degrees before moving to Edmonton, Alberta to complete his third Master’s degree at Newman Theological Seminary. Father Matthew’s research focused on the doctrine of the Trinity as well as the use of sign language in the liturgy of the Mass. Upon completing his work, he agreed to the request of the Catholic Archdiocese of Edmonton to remain in the community and seek holy orders. Father Matthew’s ordination garnered national media attention, with newspapers from Edmonton to Montreal covering the story.

Recently I sat down with Father Matthew after he spoke in the chapel service at Taylor Seminary, here in Edmonton. Our discussion spanned topics from the Roman Catholic Church to a theology of Deafness to the doctrine of the Trinity. I quickly discovered that the Reverend has a keen mind and a pastoral heart and I found this wide-ranging conversation to be rich and thought-provoking. I trust that you will too.