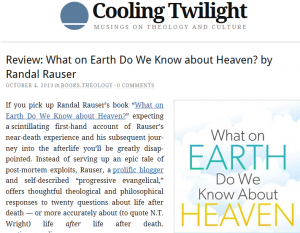 The blog Cooling Twilight (great name, by the way) has reviewed What on Earth Do We Know About Heaven? You can read the review here. The closing of the review summarizes matters nicely:

“In this slim vol­ume Rauser tack­les impor­tant and intrigu­ing issues in a robust and engag­ing way, pro­vid­ing a rea­soned alter­na­tive to so much of the heaven hype that’s cur­rently sat­u­rat­ing the Chris­t­ian marketplace.”

Like I said, I think this summarizes matters nicely. In the book I present the lineaments of an orthodox Christian conception of the afterlife (in marked contrast to the platonized visions that continue to be popular in the pew) and then I reason out from that starting point to consider this future state from several perspectives.

But this creates a problem which leaves me in some worry regarding the future prospects for my literary child. Here’s the dilemma succinctly stated:

The marketplace simpliciter is crowded with sensationalistic and emotionally involving narratives of visiting heaven, some of which have seen the world from atop the New York Times Bestseller list. Heaven is for Real and Proof of Heaven come to mind, the latter which I review here. These books are typically read both for comfort and for some kind of evidence of the afterlife (indeed, the evidence helps provide the comfort). And in my experience, the audiences that these books attract — while undoubtedly diverse — are also generally hostile or ambivalent toward critiques.

Case in point: A couple years ago I drew up a book proposal that would provide a careful, charitable and reasoned response to Heaven is for Real. My literary agent tried shopping it around, but alas no publisher would touch it. It turned out that no publisher wanted to be seen to be picking on a little kid. (Heaven is for Real is based on the supposed recollections of four year old Colton Burpo’s visit to heaven.)

I assure you that I wasn’t intending to pick on anybody in my aptly titled What on Earth Happened to Colton Burpo? But I did lay out the negligible evidence for a genuine heavenly experience and the substantial evidence that would tell against it, and I left it to the reader to decide.

No dice. It didn’t matter how fair I was. There simply were not enough people interested both in heaven and a critical analysis of Colton’s claims to warrant the book.

So will What on Earth Do We Know About Heaven? escape the dreaded logic of Randal’s Heaven Dilemma?