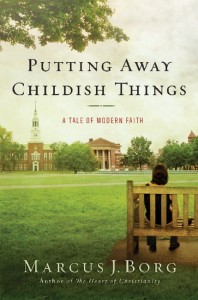 I have long been a fan of what one might best call “theological fiction”, that is narratives that raise profound theological questions and pose intriguing theological analyses. The best works in this area are by theologically informed novelists: witness Dostoyevsky’s The Brothers Karamazov, Graham Greene’s The End of the Affair and (so I would claim) Irving’s A Prayer for Owen Meany.

A subset of theological fiction are so-called “didactic narratives”, books that are written primarily as a vehicle to convey theological ideas. Typically these books don’t garner the same respect as the best of theological fiction (though the most notable exemplars, like C.S. Lewis’ work, provide something of an exception). Recent didactic works include several writings by Brian McLaren, Paul Maier’s A Skeleton in God’s Closet and Craig Hazen’s Five Sacred Crossings.

And now you can add Marcus Borg to the list of didactic novelists. The other day I was walking the aisles of the bookstore when I discovered that Borg, the prolific (liberal/progressive) New Testament scholar, had joined the ranks of the didactic novelists with his 2010 book Putting Away Childish Things. Since I was in the mood for some lighter fare, I picked up a copy.

In a didactic novel like this it is appropriate to distinguish the quality of the narrative independently from the quality of the theology conveyed through that narrative. So let’s begin with the story. On this count, Borg’s novel is an admirable first effort. His prose is generally effective at conveying imagery and mood. To take one example, when Borg describes the protagonist Kate walking through the woods in winter I could readily envision the puffs of breath and the crunch of snow.

Character-wise, the book is spread a bit thin. There are probably ten significant characters in the book and not enough time to flesh each of them out.  As for plot, well let’s just say the topics — the nature of liberal theology, the politics of the academy, the challenges of book promotion and tenure application — are not the stuff of bestsellerdom. But as a professor and author who knows both the worlds of the academy and publishing quite well, I can commend the admirable verisimilitude. It is clear that Borg is writing about what he knows. And if the plot doesn’t exactly lend itself to compulsive page-turning, it is nonetheless sufficiently engaging that I had finished the book in a couple days with no effort. I will say, however, that I found the ending to be a bit of a wet firecracker. When I finished the book my first thought was that the sum of the parts somehow seemed greater than the whole.

One final quibble before I turn to theology. In my opinion, the dialogue was probably the weakest aspect of the book from a literary standpoint. This is especially evident when Borg attempts to convey information to the reader by having his characters engage in clumsy dialogue. For example, at one point one character says to a worldclass scholar on David Strauss: “Strauss’s book was translated into English by George Eliot…. Of course, you already know this.” (263) She’s right, as a famous scholar of Strauss he already knows it. And now the reader does as well. Such exchanges leave the reader with an awkward locution which appears artificial and intrusive.

As a didactic novel, the most important part of Putting Away Childish Things is the extent to which it stimulates theological reflection in its readers. Predictably, the theology conveyed in the novel is reflective of Borg’s own theological position. Like Borg, the main protagonist, a professor named Kate Riley, is a liberal Christian who rejects virtually all the traditional Christian dogmas (incarnation, atonement, resurrection) whilst basing her religious convictions on a number of mystical experiences she underwent in her twenties. (The other main protagonist, a senior scholar named Martin Erikson, also seems modelled on the author.)

I have no quibble with a liberal theologian writing a novel from a liberal perspective. What disappoints me most about the book is that there is no articulate exponent for another perspective. One of the main vehicles for communicating Borg’s theology comes through a class Kate is teaching on religion and the Enlightenment. This device allows Borg to include a defense of his liberal interpretation of Christianity in a classroom setting. Along the way Kate leads several open-minded and thoughtful students into their own “enlightenment”. But there is nobody in the class (or anywhere else in the book) to offer a dissenting opinion. Unfortunately, the most formidable conservative is a fellow named Peter who heads up the campus Christian group. And for all his devotional sincerity, Peter is clearly no match for Kate. (Nor does he try to be. Indeed, his only role is to warn the Christian students taking Kate’s class to beware of her insidious liberalism.)

This is especially disappointing given one of the underdeveloped plotlines in the book. The story is primarily set at two schools, a liberal arts college named Wells and a mainline seminary named Scudder. As the story unfolds we learn that Scudder has been offered a generous endowment to fund a chair of evangelical theology. Initially the liberal Scudder professors are leery about accepting the offer but eventually they come around. But alas, the story ends before we ever hear who this evangelical scholar might have been. Borg’s decision not to include a progressive and articulate evangelical voice in the narrative (perhaps one inspired by his personal friend N.T. Wright) through this or another plot device seems to me to be a missed opportunity.

And ultimately that’s where I find myself, appreciating the novel for its various strengths but regretting Borg’s decision not to include a more formidable interlocutor for his own liberal perspective than the discombobulated conservative Christians that populate Kate’s classroom.