Yesterday Honest John Law responded to my critique of Jonathan Pearce by making the following observation:

“I have personally known Hindus who are educated and intelligent and fully capable of considering the degree and complexity and specificity of events, and they believe Ganesha was an agent for them.  However, I doubt many Christians are willing to accept their claims.”

John’s certainly correct about that. But I take it that the really interesting question is not whether Christians recognize the existence of Ganesha or not. Rather, the interesting question is what Christians do with putatively meaningful events or states of affairs (i.e. those which meet the demands of complexity and specification) which are best interpreted in context as being due to the actions of an entity not recognized by the Christian.

We should begin by recognizing that this isn’t a question unique to Christians or even to religious people. Rather, it is a question that is faced by anybody.

I made this point in my critique of Jonathan with the example of a person who climbs a mountain whilst believing he is the first human to do so, and who then seems to find evidence of human agents who have been there before. What does the mountain climber do with the putatively meaningful state of affairs of a rock with an apparently meaningful etching on it? In fact, he has several options.

Response 1: Deny that the etching is the result of agency (i.e. it is in fact a result of coincidence).

Response 2: Accept that the etching is the result of human agency.

Response 3: Accept that etching is the result of agency but not human agency.

Now let’s say that a Hindu couple has an experience of adoption that parallels the Sparks case (with a verse from the Upanishads substituting for our verse from Proverbs). The Hindu couple attributes the circumstances to the providential orchestrations of Ganesha. What should the Christian think? Once again, you have the three basic options.

Response 1: Deny that the event is a divine sign (i.e. it is in fact a result of coincidence).

Response 2: Accept that the event is the result of Ganesha’s agency.

Response 3: Accept that event is the result of agency but not Ganesha’s agency.

As I said, Christians aren’t going to avail themselves of response 2. But response 1 and 3 are both available to them. Let’s start with 3.

So what agencies would be candidates for explaining the Hindu couple’s adoption case? Christians believe in two types of non-human, non-divine agencies: angels and demons. Thus, one could potentially appeal to either as an explanation for the Hindu adoption case. However, neither option seems very plausible to me. Demonic agency is implausible since there is nothing malevolent about the case, and I would think if demons exist then they’ve got better (read: worse) things to do with their time than orchestrate adoptions! (One could perhaps argue that demons orchestrate Hindu adoptions to strengthen the conviction Hindus have in the false claims of Hinduism, but this seems implausible to me. Of course a Hindu could think likewise that the Sparks case was attributable to demonic agency.)

As for angelic agency, this seems to me otiose for if we’re going to appeal to a non-human benevolent agency, we might as well go to the source of all goodness. Is it possible that God — understood as Christians define him — could have orchestrated the events that led to the Hindu adoption and that the Hindus correctly identify the presence of an agential cause but incorrectly identify that cause as Ganesha based on errant beliefs? Indeed, this is possible. And I don’t just mean logically possible. I mean relative to Christian beliefs it is a live possibility (i.e. one to be considered).

Now you might ask why God would intervene in Hindu adoptions whilst leaving signs of his divine action. Does this, for example, suggest something about Hinduism as a salvific vessel? No, it doesn’t. (Or, more modestly, it would be a stretch to think that it does.)

Okay, but if God is going to intervene in Hindu adoptions and leave Hindus with the justified (but false) belief that “This adoption is a sign of Ganesha’s action” then doesn’t that mislead people into thinking they’re just fine as Hindus? Well it might indeed lead them to conclude falsely that Ganesha orchestrated the adoption, but it wouldn’t necessarily mislead them qua the salvific efficacy of Hinduism.

For example, one possibility is that the sign confirms not the truth of Hinduism but rather the adequacy of Hinduism as a salvific vessel by which some individuals come into a saving relationship with the Christian God. To be sure, this isn’t my view, but this would be reflective of a form of Christian inclusivism that has been widely embraced by the Catholic Church based in large part on the work of theologian Karl Rahner. In that sense, the view that other religions can, under certain circumstances, serve as salvific tools for the one God is within the Christian (if not evangelical) mainstream. Consequently, it remains an option for interpreting putative divine signs in at least some belief systems contrary to Christianity. 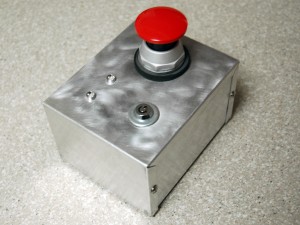 Now back to Response 1.

Can a Christian interpret one case of adoption (e.g. the Sparks case) as the sign of divine action whilst dismissing a parallel case (e.g. the Hindu case) as an instance of coincidence? Sure, this too is possible.

Consider an illustration. Imagine that Bill has just purchased one of Professor Pearce’s Lightning Generators (pictured to your right). All one does is wait until there is a sufficient electrical charge in the clouds and then the person pushes the button and the Lightning Generator releases the charge.

So Bill invites his friends over to his backyard on a stormy afternoon. Then he dramatically announces: “I will now generate lightning!” Everybody laughs (Bill’s such a card). But then he counts down “3, 2, 1…Boom!” He pushes the button and a light flashes across the sky.

Everybody applauds. Then Bill’s neighbor Doug says “Oh yeah? Well if you can make lightning then I can too. 3, 2, 1 … Boom!” Suddenly another flash of lightning shoots across the sky.

But from Bill’s perspective things are very different. Insofar as he knows that Doug had no Lightning Generator, he could reasonably conclude that he caused the lightning to flash while believing that Doug didn’t (i.e. that Doug’s case was a coincidence).

Just as Bill believes he has a lightning generator which explains some flashes of lightning, so the Christian believes he has a knowledge of God which explains some prima facie complex and specified events. Thus, just as Bill could be justified in attributing Doug’s lightning flash to coincidence, so the Christian could be justified in attributing the Hindu adoption to coincidence.