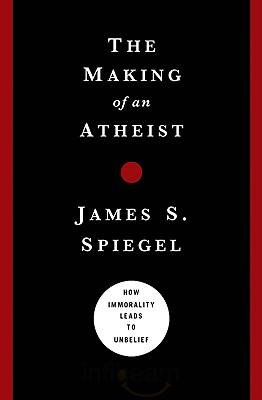 James Spiegel. The Making of an Atheist: How Immorality Leads to Unbelief. Moody Press, 2010.

If the new atheists distinguished themselves from the milquetoast atheism that preceded them by their honing of a sharper rhetorical knife, James Spiegel’s book The Making of an Atheist responds with the razor sharp edge of a Samurai sword. If the new atheists have specialized in sweeping assertions about the questionable rationality of Christians, Spiegel one-ups them with sweeping assertions about the morality of atheism. If the new atheists have berated Christians as a bit soft in the head, Spiegel returns the favor by leveling a charge of corruption in the soul.

Get it? The picture ain’t pretty.

Atheism, says Spiegel, is not really an “intellectual movement”. Rather, “It is little more than moral rebellion cloaked in academic regalia. The new atheists are blinded by their own sin.” Atheism shirks an “objective assessment of evidence” because of “stubborn disobedience” and “willful rebellion”. It is “the suppression of truth by wickedness, the cognitive consequence of immorality. In short, it is sin that is the mother of unbelief.”

And that’s just in the first few pages of the first chapter!

While Spiegel believes that, biblically speaking, atheist are fools, he stresses that this is not foolishness as mere ignorance. Atheists are not “simply obtuse or feeble-minded”. Rather, they are in deep moral rebellion. He explains:

“When smart people go in irrational directions, it is time to look elsewhere than reasoning ability for an explanation. And Scripture gives us clear direction as to where we should look. Consider the psalmist’s declaration that ‘the fool says in his heart, ‘There is no God’” (Psalm 14:1). The Hebrew term rendered ‘fool’ here denotes a person who is ‘morally deficient.’ And elsewhere in the Old Testament Wisdom Literature we learn of various symptoms of this moral deficiency. The book of Proverbs says ‘a fool finds no pleasure in understanding’ (Proverbs 18:2), that ‘fools despise wisdom and discipline’ (Proverbs 1:7), that ‘a fool finds pleasure in evil conduct’ (Proverbs 10:23) and is ‘hotheaded and reckless’ (Proverbs 14:16).” “It is not intelligence they lack so much as self-control and the right values.”

Spiegel provides other scriptures to support his provocative thesis. For instance, he observes of Ephesians 4:17-19: “The root of the problem, apparently, is not a lack of intelligence but rather a hardness of heart that is itself caused by immoral behavior.” He cites John 3:19-21, “men loved darkness instead of light because their deeds were evil”, and then observes:

“Note also Jesus’ point that evildoers do not simply ignore or reject the light but actually ‘hate’ it. If this is so, then we should expect some atheists to display a certain amount of bitterness and even rage toward the idea of God. And, of course, this is just what we find among many atheists, especially the leaders of the new atheism.”

But the most important passage for Spiegel’s provocative thesis is Romans 1:18-21:

18 The wrath of God is being revealed from heaven against all the godlessness and wickedness of people, who suppress the truth by their wickedness, 19 since what may be known about God is plain to them, because God has made it plain to them. 20 For since the creation of the world God’s invisible qualities—his eternal power and divine nature—have been clearly seen, being understood from what has been made, so that people are without excuse.

21 For although they knew God, they neither glorified him as God nor gave thanks to him, but their thinking became futile and their foolish hearts were darkened.

“In this passage Paul makes clear that the problem with those who don’t believe in God is not lack of evidence. On the contrary, God has made His existence and attributes so ‘plain’ and ‘clearly seen’ from creation that belief is inexcusable. He also explains how, in spite of this, some reject the truth, specifically through immoral behavior.”

A book like The Making of an Atheist is extraordinarily provocative, but it is really important in assessing it that we keep our wits about ourselves. A level head and a cool demeanor will serve us well if we are to weigh the extraordinarily robust thesis.

And that is the place to begin, with an appreciation of just how extraordinarily robust this thesis is. Spiegel seems to believe that anybody who fails to believe the proposition that God exists does so out of rebellion. I don’t dispute that some people fail to believe this proposition out of some sort of rebellion (or at least with rebellion as a contributing factor). This should be no surprise for there are many things we can fail to believe at least in part due to our own rebellion. According to a popular story, certain Catholic church leaders and philosophers simply refused to peer through Galileo’s telescope. Whether that happened or not, we all know that people can sometimes retrench in a position out of irrational obstinance, and the withholding of belief in God can certainly be an instance of that.

But it is quite another thing to suggest that failure to believe in God is always a matter of rebellion. Let’s start by making it clear that Spiegel’s moral rebellion thesis captures not only atheists but agnostics as well since on Spiegel’s view anybody who fails to affirm that God exists is in rebellion. In  “The night Dr. Z became an agnostic” I discuss a scenario of a Christian doctor who becomes an agnostic after witnessing moral horrors in the Congo. Does Dr. Z’s move to agnosticism indicate moral rebellion? Spiegel requires us to think so.

Spiegel acknowledges the problem of evil, but he insists that it doesn’t call theism into question. Instead, it only calls God’s goodness into question. He writes:

“The objection from evil does pack some punch, and it is a genuine problem for theists. But it could never count as grounds for atheism. Even if successful, it only undermines certain beliefs about the nature of God. It does not—nor could any argument—disprove the existence of a world creator and designer.”

“At most, evil should prompt us to reconsider what kind of God exists, not whether God exists.”

This analysis is deeply flawed. For one thing, the problem of evil cannot be separated so neatly from arguments for a world-designer as Spiegel seems to suppose. From kluges to carnivores, the structure of the world suggests to many people that if there is a designer then he is either inept or malevolent. Whether they are correct or not, these are most certainly not hermetically sealed categories. The boundary between the problem of evil and arguments for design is porous indeed.

And it is difficult to fathom how Spiegel could offer a meaningful critique of Dr. Z’s position. Who is to say that after attempting to repair the upteenth fistula due to a brutal gang rape, Dr. Z ought to have concluded “Maybe God isn’t good” rather than “Maybe God doesn’t exist”?

Even worse, Spiegel’s proposed resolution of the problem of evil offers a very strange take on Romans 1. According to this analysis it would be rebellious to become an agnostic but it would not be rebellious to conclude that God exists and is malevolent like Shiva or Molech. I highly doubt Paul would have been satisfied with such an analysis of his own words.

Note as well that even Mother Teresa comes out as rebellious on Spiegel’s analysis. You see, in her posthumously published journals we discovered that Mother Teresa frequently struggled with doubting the very existence of God. If such doubt is a sign of rebellion (as per Romans 1) then Mother Teresa was in rebellion against God. Essentially Spiegel has offered us a prosperity gospel when it comes to belief in God. Just as the conventional prosperity gospel chalks up sickness and poverty to a lack of faith, so Spiegel chalks up doubt and disbelief to the presence of rebellion. Perhaps this seems like a good idea when you’re targeting the new atheists. But Mother Teresa?

This brings me to Spiegel’s use of scripture which is little more than proof-texting. Many of the texts Spiegel cites talk about foolishness and rebellion generally and are not particularly germane to atheism. The texts that do seem to relate explicitly to atheism specifically are Psalm 14:1/53:1 and Romans 1. I address the Psalm passages in the article “Are atheists all fools?” (I also do so at more length in You’re not as Crazy as I Think.) There I note that Psalm 14 and 53 are not really talking about atheists at all. Rather, they’re talking about folks who purport to believe in God and then live inconsistently with their belief. So ironically enough, the Christian who quotes Psalm 14 to describe atheists may be oblivious to the indictment the text provides to that very Christian.

This is where things get awkward for Spiegel. You see, one would think that living consistently with one’s Christian beliefs would involve commitment to the Golden Rule. And the Golden Rule would surely oblige a scholar to present the views of his interlocutors with the greatest nuance and charity. As you might have guessed, Spiegel does not present the views of naturalists (where “naturalist” is a particular kind of atheist) with the greatest nuance and charity. For example, he asserts that “naturalists only believe in physical facts”  from which it follows that they can’t believe in evil. This is a caricature of naturalism which presents a clear violation of the Golden Rule since Spiegel most assuredly would not like Christianity to be caricatured in this way. And by professing belief in God while failing to follow the teachings of Jesus, Spiegel places himself under the condemnation of Psalm 14:1, an ironic conclusion to be sure.

Of course, this isn’t just a slight on Spiegel, for there isn’t a Christian alive who consistently lives out the teachings of Jesus. We all live inconsistently with our beliefs, and when we do we find ourselves under the same condemnation that we apply to others.