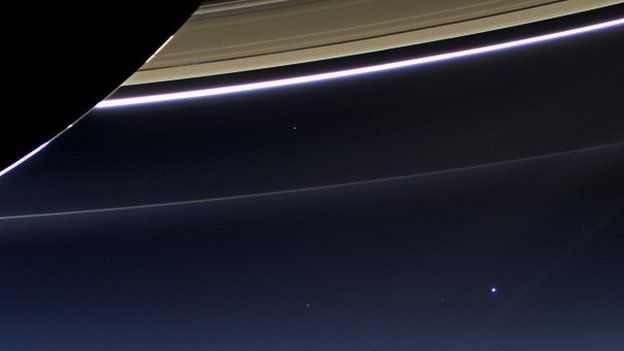 Twenty-three years ago the Voyager space probe gave us the iconic image of earth as a pale blue dot, an image immortalized by Carl Sagan in his majestic book Pale Blue Dot. A few days ago the Cassini probe sent back its own entry to the pale blue dot catalogue, a haunting image of earth as an infinitesimal speck beneath the spectacular span of Saturn’s rings. The image truly is majestic. But to be honest I still prefer the earlier Voyager image with earth a bare speck of dust suspended in a shaft of light.

The release of the picture was well-timed, for this past weekend the first trailer for Neil deGrasse Tyson’s upcoming “Cosmos” series was released. You can watch it here:

I’m a big fan of Neil deGrasse Tyson (as long as he stays away from theology). But I must admit that my reaction to the Cosmos trailer was mixed. The trailer starts off well with Sagan’s haunting voice harkening back to the original Cosmos series on PBS. But from there the trailer seemed a bit frenetic, bouncing all over the place. Will the new Cosmos rival the original? Time will tell.