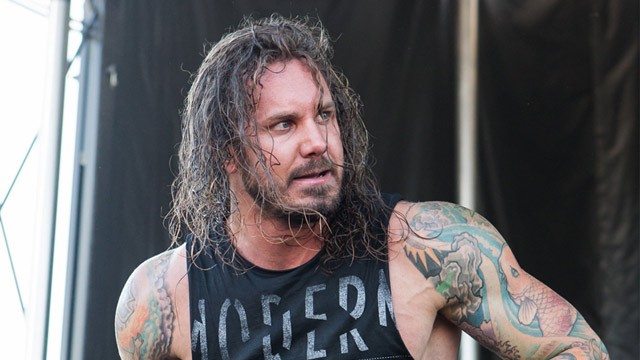 If you know your heavy metal you know Tim Lambesis, the lead singer of As I Lay Dying, one of the fiercest, critically acclaimed, and most popular metalcore bands. To be honest, it is something of a misnomer to call Lambesis a lead singer. He really was the lead growler-barker-screamer, a vocal style that doubles as an effective way to peel paint. Lambesis and As I Lay Dying were also notable as a group of Christians and added philanthropy to their list of distinctives.

And that’s where things get, er, interesting. A month ago Lambesis was arrested … for attempting to hire a hit man to kill his estranged wife.

Since I don’t follow the metal world all that closely I only heard about it when I read an article in Rolling Stone when Lambesis made bail.

Yeah, I was disappointed (I’ve got several As I Lay Dying albums) but I’ve lived long enough and suffered enough disappointments that nothing’s shocking anymore. I’m so jaded that I wouldn’t bat an eyelash if I were to read “Billy Graham charged with murder” on the headlines tomorrow.

But I thought to myself: “I can just see some atheists using the whole sorry Tim Lambesis affair to make hay. ‘See?! This is what Christians are all about. Hypocrites!'”

Then I continued further into the Rolling Stone article and read:

“Lambesis and his wife  split last summer when the singer told Meggan in an e-mail that he no longer  loved her or believed in God. She later learned that Lambesis was making regular  visits to a girlfriend in Florida and had had other affairs.” (emphasis added)

Hmm, suddenly one could flip the narrative around completely. On this retelling it’s when you walk away from the faith and cease to believe in God that you are more likely to cheat on your wife and solicit a hit man for murder. Score one for the Christian theists.

But I’m not really in the mood to exploit the wickedness of one human being for partisan gain. Whatever your theological or metaphysical commitments (or lack thereof), whether you’re an atheist, or Christian, or anything else, this strikes me not as an occasion to score rhetorical points for your particular worldview.

Sadly, it is just one more example that our species is on the whole pretty rotten. However we got here, that’s where we are.