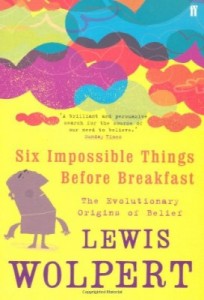 I’ve had Lewis Wolpert’s book Six Impossible Things Before Breakfast: The Evolutionary Origins of Belief (Faber and Faber, 2006) sitting on my shelf for a while now. So yesterday I pulled it off and decided to give it a read. I didn’t get very far before I had to pause. The third sentence of the introduction, in fact. Let me quote how far I got:

“I became interested in belief for several reasons. In the first instance I wanted to know why my non-science friends had such difficulty with understanding science and why there was a quite strong anti-science movement. It was a real puzzle for me as I believe science to be the best way to understand how the world works.” (ix)

But what if Wolpert means something much grander and bolder than this? What if he believes that science somehow holds the key to understanding everything? Art, literature, ethics, consciousness, personal identity through time, the meaning of life? Now that would be much more contentious. And if disagreeing with that totalizing vision of scientism is sufficient to be counted non-science then sign me up.

As I look back at the span of these three sentences retrospectively I find other red flags snapping in the wind as well. For example, in the first sentence Wolpert explains his interest in “belief” by identifying the putatively irrational beliefs of his “non-science” friends. In other words, he seems to be equating the word belief with a particular type of belief, i.e. that which is irrational or unjustified. Thus we see the neutral epistemological term “belief” being morphed into a piece of rhetorical shorthand in a way that can only make an epistemologist wince. (And so we have the sorry spectacle of John Loftus insisting that the concept of belief is somehow of Christian origin.)

And from there I turn back to the second sentence. I definitely want to know more about this “anti-science” movement that Wolpert describes. Is it really anti-science as in rejecting the scientific method and the technological achievements of that method?

I am guessing that Wolpert’s target here (or at least one of them) is this position called biblical creationism. Like Wolpert, I am a critic of biblical creationism. However, to think that creationists are anti-science is completely mistaken. It is true that creationists reject Neo-Darwinian evolution based upon their reading of the Bible. But even as they do so they labor to show that the biblical (Genesis) narrative does, in fact, line up with the best scientific theories. Thus, they expend great effort to demonstrate scientifically that Neo-Darwinism is false, that there was a global flood and that the earth is of a young age. The results may be unpersuasive for most people not already committed to their theological and biblical assumptions. But still, the entire discussion is one that is carried on under the aegis of the scientific method. More properly then, the problem of the biblical creationists is not that they are anti-science but rather that they read the Bible naively, disregarding the historically conditioned nature of the narratives, and attempting to conform those narratives to a range of scientific evidences. If anything, they’ve subverted the authority of scripture properly understood to their own scientific models.