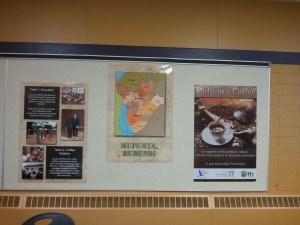 Last year I was running a seminar at a K-12 Christian school for some teachers and board members when I noticed this unassuming display. It reflects a project at the school in which they’ve partnered with an African village. I initially wrote that they “adopted” an African village. But that paternalistic language doesn’t convey the fact that this is a partnership in which the school supports development in the village by buying and marketing their excellent coffee here in Canada.

What a great and practical way to put Christian principles into action. And I am happy to report what many of you already know: that programs and projects like this are part of a much greater trend within evangelical Christianity as we return to the roots of social transformation that motivated nineteenth century evangelicals like William Wilberforce, William Ewart Gladstone, William Booth (what’s with all these Williams?) and Anthony Ashley Cooper (Lord Shaftesbury).

When I talk to evangelicals about the need to regain a broader social vision, I often give them the example of the United Church of Canada’s statement on bottled water. In Canada the United Church (originating from an amalgamation in 1925 of Presbyterians, Congregationalists and Methodists) represents to many “liberal” Christianity. One example I’ve often heard is the controversial moderator of the United Church from 1997-2000, Bill Phipps. Mr. Phipps denied that Jesus was God and remained agnostic about the afterlife. But he remained fundamentally committed to the social agenda of the gospel. And more than once I’ve heard evangelicals note with some satisfaction the precipitous decline of the United Church and tie it into the hollowing out of its theological core represented by people like Mr. Phipps. (I am sympathetic to the diagnosis, but not the satisfaction with which it has sometimes been made.)

When the kind of theological liberalism represented by Bill Phipps became more common in mainline Protestant denominations in the early twentieth century, many evangelicals reacted by redoubling their efforts at gospel proclamation. Unfortunately, in the redoubling of those efforts at theological pronouncement, many neglected (or even set aside) the accompanying social change which was part and parcel of gospel proclamation for the nineteenth century evangelicals noted above. It’s extraordinary when you think about it, but in the fear of being labelled “liberal” many failed to do the very things Jesus had commanded such as feeding the hungry, providing drink to the thirsty, inviting in the stranger, and visiting the sick and imprisoned. Case in point: growing up in the church, I thought for a long time that social engagement meant leaving tracts in the public washroom for lost souls.

But as has often been said, souls come attached to bodies. What is more, bodies live in a world. What are we doing for the bodies and the world in which they live?

Which brings me back to the water. For awhile I was taken in by the idea of bottled water (though my cynicism was fed when I discovered that in England Coca Cola was drawing the water for its “Dasani” brand straight out of London’s public water supply in the Thames River, which was already available straight out of your taps, albeit without the plastic bottle).

But the United Church’s work on bottled water (http://www.united-church.ca/ecology/water) recognizes that the issue is not simply that 355 ml of water is better than 355 ml of pop. The issue is also about waste. (The water out of your tap is not only a better environmental choice, it is also tested more regularly than bottled water and is likely safer to drink.) And then there’s the issue of privatizing a public resource. I would strongly urge anybody interested to read up on the disastrous privatization of the Bolivian water supply in 1997-2001. Once you read up on the Bolivian case you’ll recognize that water is indeed a profoundly moral issue.

So while the United Church has many problems with some of its more liberal factions, the evangelical can still benefit from that church’s awareness of broader social issues.

And increasingly evangelical churches are aware of and actively engaged in just those issues. Today a commitment to social action needs no defense among evangelicals, a fact which brings me back to the modest display at that Christian school. Here we have a great reminder that the gospel of Jesus Christ is a message to change the heart, and through the heart to change the world.