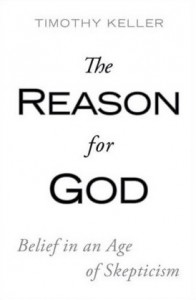 The other day I finally purchased Timothy Keller’s bestselling 2008 book The Reason for God: Belief in an Age of Skepticism (New York: Riverhead). Why the long delay? Simple: it took that long to find a copy for 2 bucks at Goodwill and folks, I am cheap.

I’m also cynical when it comes to bestselling popular books. It’s not my fault. Professors who write books that don’t sell well are expected, even obliged to be cynical of massively popular books written by culturally savvy populists. So I began reading the book set to vindicate my biases. (At least I’m self-aware!)

On the same day that I brought Keller’s book home my wife brought home squares from the bakery. One of them was colored white and, as best I could taste, flavored with some sort of pasty vanilla. It was very hard to remember the flavor, but even so after a bite I found myself saying “I think I’ll try another bite of that” until the square was gone. Somehow the “vanilla taste” (vanilla both literally and in terms of a superficial blandness) seemed to have some inexplicable deeper quality that kept me eating.

The parallels with Keller’s book are striking. It too is packaged with a surprisingly bland, white minimalism from the cover on down to the prose itself. The first “bite” reveals a writer who, while undoubtedly an effective and luminously clear communicator, does not sparkle like the Oxbridge don C.S. Lewis (who Keller clearly loves to quote). But even so, after a first bite I found an appealing quality that led me to take a second, and a third. (If you’re a stickler for precision in metaphors then let the bites be equivalent to the reading of specific chapters.) I have now just finished my fifth bite, the chapter on “How Can a Loving God Send People to Hell?”, and I can understand why the book has been popular. It may not be overly flashy, but it really is effectively written and argued for a lay audience.

And it is here that I’ve decided to drop the anchor and abide awhile not least because this was the chapter that, thus far, raised the most serious objections from this reader.

Every chapter begins with comments and questions from skeptical congregants that Keller has heard in the past. This is how chapter 5 on hell begins:

“I doubt the existence of a judgmental God who requires blood to pacify his wrath,” said a frowning Hartmut, a graduate student from Germany. “Someone had to die before the Christian God would pardon us. But why can’t he just forgive? And then there’s all those places in the Old Testament where God commands that people be slaughtered.”

“All that is troubling, I agree,” responded Josie, who worked for an art gallery in Soho. “But I have even more of a problem with the doctrine of hell. The only God that is believable to me is a God of love. The Bible’s God is no more than a primitive deity who must be appeased with pain and suffering.” (70, emphasis in original)

Why am I beginning by quoting this entire opening passage? Because I think it is of great strategic importance to the book. In the introduction to The Reason for God Keller writes: “In the first half of this volume we will review the seven biggest objections and doubts about Christianity I’ve heard from people over the years.” (xx) You might think that Hartmut’s points on the violence of atonement and genocide constitute very big objections. I would agree. By contrast, I doubt that “Christianity is a straitjacket” (chapter 3) is anywhere near as weighty (or as difficult to address). That’s why Josie’s comment, following on immediately from Hartmut’s, is so strategically important. Keller clearly agrees with Josie that hell is the bigger problem, and one that ultimately encompasses the other objections. Thus, I would submit that embedded in this apparently innocuous opening is an argument like this:

(2) Hell constitutes an objection to Christianity based on divine violence which is even more serious than blood atonement or divinely commanded genocide.

Consequently, if Keller can address Josie’s objection to Christianity based on hell, the assumption is that he will have effectively addressed the more serious problem, thereby having nullified the lesser objections of Hartmut. And this frees him up to spend other chapters discussing other objections like Christianity being a straitjacket without being vulnerable to the charge that he’s hitting softballs because the hell chapter already fielded the most difficult violence objection.

I disagree with this argument because hell is a different kind of problem than blood atonement and divinely commanded genocide. To be sure, they all share a common element of divine violence. But that doesn’t mean that addressing hell necessarily provides an explanation (or even the reasonable hope for an explanation) for the other two problems as well. Consequently, even if Keller did provide an adequate response to the objection of hell, one could still object to Christianity based on the centrality of blood atonement in Christian doctrine and genocide in the Old Testament biblical narrative. And thus it seems to me that Keller is still liable to the charge of opting to hit some softballs in other chapters.

Be that as it may, we can still ask the question, did Keller successfully address the problem of hell? We will turn to that question in our next installment of this series.