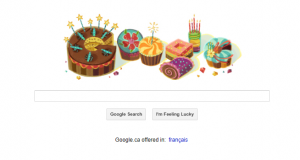 Too bad I live in a culture that celebrates youth rather than age.

When I was a young boy I realized I had received a diagnosis for a terminal illness. It turned out that I suffer from human mortality syndrome (HMS). Although I feel fine at the moment my doctor reassures me that I will succumb to the dreaded disease eventually.

Then he reminds me that “Everybody else has it too. Everybody gets old and everybody dies.”

I opened my computer and went to Google, my doorway to the World Wide Web.

Interesting. The word “Google” had been converted into birthday cake.

What a delightful coincidence. Somebody else is facing the existential grip of HMS today. Who is it?

I glide my cursor over the Google birthday cake and my blood runs cold when a little text box pops up joyously declaring “Happy Birthday Randal!”

Sorry? Google is recognizing my birthday?

I’d be flattered if I thought there was a team of Google geeks at HQ in Mountain View, California who decided at a closed door meeting in January that Google should publicly honor my birthday for the world to see.

But alas, it is quite clear that my little Google birthday cake is just for my melancholy countenance, and as such it serves merely as a reminder that vast databases I know nothing about wield a horrifying amount of information about me including, among other things the day of my birthday.

“Hey Randal, Google knows a lot about you and is making lots of revenue by feeding that information to God-knows-who. We’re watching you buddy. And here’s a virtual Google cake just to remind you that you have no privacy anymore….