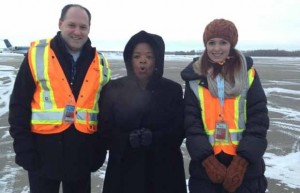 Oprah Winfrey visited Edmonton the other day to give an inspirational evening of Oprah-speak. Apparently Oprah has a lot of inspiration to share. (I would too if I was making the money she makes for public appearances.)

Incidentally, this is a picture of Oprah arriving at Edmonton’s airport when the temperature was about -20 c. Apparently she’s in shock, the winter gusts off Lake Michigan having proven insufficient to prepare her for a Canadian prairie winter. But the fellow standing beside her doesn’t even need a woolen cap for his bald head. Now that’s a hearty Albertan!

As I was on the drive into work the next morning the radio host commented that she had attended the show. “My spiritual cup is full,” she said. With that she added, “And I’ve resolved to be nicer to people.”

Ahh, yes, a cup full of spirituality (but not religious!) and a new resolve to be nice to others. A night with Oprah definitely gives a sweeter hangover than a night spent with Jim Beam or Jack Daniels.

But is the benefit of the Oprah gospel illusory?

It depends on who you ask. Some Christians view Oprah-speak as akin to anti-freeze: sweet to the taste but lethal to the body. Others view Oprah-speak as like an orange: some parts are fit for human consumption, just so long as you don’t eat the peel or think that a diet of oranges alone is enough to sustain you. Granted, you wouldn’t want Oprah as your main spiritual guide, but who can argue with a new-found resolve to be nicer to other people?