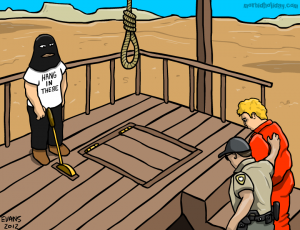 Fads come and go. And thirty years ago the fad on the playground was collecting stickers. So I followed the herd and got my photo album which I promptly filled with scratch and sniffs and various other stickers. I had quite a collection (indeed, I still have that album packed away somewhere). While the scratch and sniffs were great, one of my prized stickers depicted a man on a guillotine about to lose his head as the executioner looks down and says “Mind your fingers” (the man’s fingers were placed in such a way that he’d lose them along with his head).

Human beings have long laughed at the most grisly situations. For example, serial killers are the source of no shortage of jokes. Do you remember when the psychopathic cannibal-serial killer Jeffrey Dahmer was murdered in prison? Reportedly his last words were “I used to eat guys like you for breakfast!”

And then there’s Ricky Gervais joking about performing on a charity show for people with cancer. (Click here to watch it if you must, but be warned that it has profanity and jokes about cancer that will leave many people asking “How could anybody be so grotesque as to laugh at that?”)

Is it okay to laugh at a joke about beheading? Cannibalism? Cancer?

“Gallows humor” is defined as “witticism in the face of – and in response to – a hopeless situation. It arises from stressful, traumatic, or life-threatening situations, often in circumstances such that death is perceived as impending and unavoidable.” This Wikipedia definition is a helpful starting point. It defines gallows humor as wit when an individual is facing a stressful (though not necessarily “hopeless”) situation.

The man about to be executed who makes a joke would constitute gallows humor. Likewise the executioner who has his own stresses to face can make a joke at the situation. (And being the executioner certainly is a high stress job.) Since each is touched adversely by the stress of the situation, the humor of each would constitute an example of gallows humor.

With that thought we can turn to a press release issued last year from the Hastings Center summarizing a new study on gallows humor in medicine. The press release was titled: “Is Gallows Humor in Medicine Wrong?” and it quotes the author of the study, Katie Watson, as offering a qualified defense of gallows humor. As she writes:

“blanket dismissals of gallows humor [among medical professionals] as unprofessional misunderstand or undervalue the psychological, social, cognitive, and linguistic ways that joking and laughing work.”

Watson goes on to explain that humor has social fnctions of bonding and coping. Laughing at a situation thus provides a way to slay the monster, to release stress, to bond with others. This is how the press release ends:

“Deciding when gallows humor is okay, Watson says, turns on the ethical question, When is joking a form of abuse – of a patient, of trust, or of power? A joke about a patient’s condition told in front of the patient or the patient’s family is unethical because it has the potential to harm them. But she concludes that the tip joke was not wrong. “To me, the butt of the doctors’ tip joke is not the patient. It’s death,” she writes.

[The “tip joke” refers to a case where first responders to the scene of a pizza delivery guy’s murder made a joke about whether they should tip him.]

“Not only did the joke not harm anyone, she adds, it may have helped the residents “integrate this terrible event and get through the shift.” In so doing, the joke may also have helped the next patient get the best possible care. After all, she writes, the residents “needed to laugh before they could eat, and they needed to eat to be at their best” when it was the next patient’s turn.”

It’s an interesting claim with some equally interesting implications. Imagine the unthinkable: a doctor who, after treating a child for leukemia, makes a joke to one of his colleagues about the child’s cancer (maybe he refers to Gervais’ routine). If Watson is correct then the proper attitude is not simply to condemn the doctor as engaged in a fundamentally evil practice. Rather, one must ask the question of what function that joke might have served. Assuming the doctor isn’t simply a cruel psychopath, does this joke serve the role of helping the doctor cope with the extraordinarily difficult situation of treating children stricken with cancer? If it does, and assuming nobody hears who shouldn’t hear, then is it a harmless, even beneficial practice?

Perhaps the most interesting aspect of Watson’s analysis is that it offers a highly contextualized approach to the ethical assessent of gallows humor. The analysis implies that we cannot enquire simpliciter into the ethics of such dark humor apart from considering the persons making the joke, the persons laughing at it, and the social function that it might have. In other words, what is the social utility of the joke?

On this analysis a relatively mild joke which serves no greater teleological function apart from a cheap laugh (e.g. a cannibal pun) might be in poor taste. In that sense it may be more ethically problematic than a joke that is prima facie much more offensive but which serves an important coping or bonding function within the context that it is shared (e.g. doctors coping with children in the cancer ward).

(And what about my “poor taste” pun? Was that attempt at irony itself justified or did I cross the line?)

This sounds highly utilitarian because it is. So far nobody has said there are simply things you ought never joke about. But this doesn’t preclude the possiblity that even a utilitarian might indeed conclude that there still are things you ought never joke about. However, if that is indeed the case then what are those things for which a joke could never possibly be socially beneficial to some person or group facing a traumatic situation?