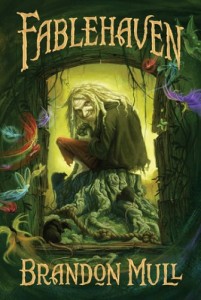 The other day my daughter set about looking for her copy of Fablehaven (a best-selling book of children’s fantasy lit) when she realized that she’d left it in my car. Since I was gone at the time she headed into her room and picked another book to read from among the approximately two hundred titles on her crowded shelves (I’m a bit of a book buying nut). As she turned to go, her freshly chosen volume in hand, she heard a thump from behind her. As she turned around she looked in amazement to see a second copy of Fablehaven lying on the floor of her room. Apparently I’d purchased duplicate copies and neither of us had realized it until now. (This is not quite as absentminded as it might sound since I buy almost all her books used at the Goodwill for a buck or two so it’s easy to lose track.) So she put back the other volume, reached down and picked up this “newly fallen” copy of Fablehaven.

This is where worldviews come into play. What are the possible explanations for the fact that precisely the book she was looking for (and a copy she didn’t even realize she had) fell on the floor moments after she was about to begin reading another book?

Coincidence. Some people will predictably reply “Coincidence!” And coincidence it may well be. But does your worldview allow for more exotic possibilities?

Psychokinesis. Is it possible that the brain has heretofore poorly understood powers to move physical objects at a distance? And could it be that my daughter’s psychokinetic powers inadvertently moved the book she was thinking about off the shelf without her even realizing it? I don’t believe this is the case but I can’t say I’m persuaded that it isn’t the case either. Three hundred years ago people derided Newton’s theory of gravity as magic for positing the notion of action at a distance. A wise man is one who chastens the strength of his opinions relative to his ignorance. And as far as the structure of the natural world goes, we’re all pretty ignorant.

Ghost. Could it be that a ghost moved the book inadvertently or intentionally? While this isn’t an option for many Protestants who consign all deceased human beings to heaven or hell pending the resurrection (after which they return to heaven or hell in newly minted bodies), it is certainly a possibility in Catholic theology which has a developed doctrine of purgatory that has included reports of ghosts interacting in the physical world at least since the Dialogues of Pope Gregory I (590-604). What is more, the disciples clearly believed in ghosts since they thought they were seeing one when they saw Jesus walking on the water as well as when they saw Jesus in his post-resurrection body.

Poltergeist. If poltergeists — so-called “playful spirits” that went mainstream with the famous Enfield Poltergeist of 1977-78 — exist then this would be just the kind of behavior one might expect from one. Slightly mischievious but generally harmless. Of course Christian theologians have not typically talked about a separate category of spirit beings beyond ghosts and angels/demons. But that doesn’t mean such entities don’t exist.

Angel or demon. Christians have long believed that angelic and demonic spirits have the ability to manipulate the physical world in various ways and bumping a book off a shelf could certainly qualify. Yikes. In that case let’s hope it’s an angel!

No doubt there are many other possibilities that our minds have not even imagined. I would simply recommend caution in defaulting too quickly (or with too much confidence) to the “coincidence” explanation. It’s also okay to say “Coincidence? Perhaps. But I wonder…”