The other day while watching an episode of Brian Williams’ program “Rock Center” I learned that Pastor Rick Warren is on a new crusade to lose weight, and help his Saddleback Church do the same. He’s lost fifty pounds so far and his church collective has dropped more than two hundred thousand pounds. Not only is that good for the heart, its also seeker sensitive as it leaves more room in the padded pews for newcomers. So I don’t care to disparage the diet at all. 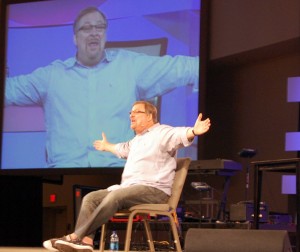 The make-up of the diet makes sense as well. Eat seventy percent fresh fruits and vegetables (I said fresh: maraschino cherries and chocolate covered raisins don’t count) and thirty percent grains and goodness (the “goodness” is my own addition since I forget what came after grains, but rest assurred it wasn’t red meat).

So what is the name of this new eating plan? Warren calls it The Daniel Diet and supposedly “bases” it on Daniel 1:12-13 where we read that while Daniel and his friends lived in Babylon, they said to the king:

“Please test your servants for ten days: Give us nothing but vegetables to eat and water to drink. 13 Then compare our appearance with that of the young men who eat the royal food, and treat your servants in accordance with what you see.”

So because Daniel and his homeboys had only vegetables and water we should have, er, seventy percent vegetables and fruit (and thirty percent grains and other stuff) along with the water. (Perhaps Warren drew up his diet from The Amplified Bible Version.)

Sounds interesting. However, I have a much better biblical mandate for losing weight. I call it “The Elijah Diet”, for we read in 1 Kings 17:2-4:

“2 Then the word of the Lord came to Elijah: 3 “Leave here, turn eastward and hide in the Kerith Ravine, east of the Jordan. 4 You will drink from the brook, and I have directed the ravens to supply you with food there.”

The great thing about this diet is that it includes meat for every morning and evening meal. The bad news is that  you are required to have access to a brook (storm sewers and garden hoses do not qualify). The worse news is that you also need a trained raven to bring you your meal.

If you can’t find a brook or a raven, then you could try my second option. I call it “The Moses Diet”. Based on Exodus 16 it is a diet of quail and manna. Unfortunately when I tested this diet the manna never appeared on my front lawn. (One morning I found a dinner roll near the driveway but it turns out my wife had left it out of sympathy.) So I was reduced to finding new ways to chow down on quail: deep-fried, diced, steamed, fricasseed … sigh.

But if you really want to get serious about weight loss you should try the golden standard. I call it “The Jesus Diet”. You can read about it in Luke 4:1-2:

Jesus, full of the Holy Spirit, left the Jordan and was led by the Spirit into the wilderness, 2 where for forty days he was tempted by the devil. He ate nothing during those days, and at the end of them he was hungry.

Believe me, Mr. Warren. The Jesus Diet is beautiful in its simplicity. You don’t have to worry about seventy percent of this and thirty percent of that. Just eat one hundred percent of nothing.

Needless to say, the point of this silly exercise is to point out that Warren’s “biblical’ diet is not really what it claims to be. The Bible isn’t wearing the trousers here. It’s not providing a life guide for eating. As the Rock Center story pointed out, when Warren decided that he needed to lose weight he consulted four nutritionists. After learning from these folk what a balanced diet looked like he arbitrarily selected a verse from the Bible to “baptize” their good advice and thereby make it “biblical”. (The fact that “Daniel Diet” is alliterated is merely a bonus.)

Christian Smith refers to this as “biblicism” by which he means “a particular theory about and style of using the Bible that is defined by a constellation of related assumptions and beliefs about the Bible’s nature, purpose, and function.” (Smith, The Bible Made Impossible, Brazos, 2011, 4). Smith then identifies ten characteristics of biblicism, the last of which is the most relevant for this discussion:

“Handbook Model; The Bible teaches doctrine and morals with every affirmation that it makes sense, so that together those affirmations comprise something like a handbook or textbook for Christian belief and living, a compendium of divine and therefore inerrant teachings on a full array of subjects–including science, economics, health, politics, and romance.” (The Bible Made Impossible, 5.)

Smith goes on to list two pages of book titles that exemplify the simplistic biblicist Handbook assumption, including the following:

Bible Answers for Every Need,

Scientific Facts in the Bible: 100 Reasons to Believe the Bible is Supernatural in Origin,

The Biblical Connection to the Stars and Stripes: A Nation’s Godly Principles Embodied in Its Flag,

Biblical Economics: A Commonsense Guide to Our Daily Bread.

As Smith observes, “Clearly masses of American Christians are biblicists who expect the Bible to be able to speak with authority on a nearly limitless range of topics….” (10)

The fundamental flaw in all these approaches is embodied in Warren’s Daniel Diet. As I already pointed out, he didn’t go to the Bible to get diet advice. He went to several nutritionists and then found a verse to prooftext whatever they told him. As I noted above, it’s also a poor prooftext since one hundred percent vegetables is not seventy percent fresh fruit and vegetables with thirty percent grains and whatever else. And of course in claiming this verse Warren completely ignores the unique situation of Daniel and his comrades as they are striving to maintain their unique cultural and religious identity whilst living under foreign occupation.

To think that this kind of engagement with the text makes one biblical is just as absurdly reductionistic as thinking that pinning a Union Jack button to your lapel makes you British. If anything, the staggering superficiality of the whole project shows just how unbiblical mainstream evangelicalism really is.