When I grew up in the eighties many of my friends had posters of Bo Derek and Farah Fawcett on their walls. I had a poster of a Ferrari 328 and a Lamborghini Countach. I still remember the first time I saw a Porsche 928 rolling down the road. “It’s like seeing a movie star!” I told my parents (though I must admit that my perspective on the 928 has soured somewhat since). So when I turned sixteen in 1989 my friends and I spent a lot of time at car dealerships trying to get the salesman to let us take cars for a test drive. The 1984 Mustang SVO was fun, although I must admit to finding the whistle of the turbocharger somewhat irritating. (After driving a 1985 Mustang 302 I could understand why the four cylinder SVO never found its audience.) Then there was the 1969 Dodge Dart that we got to drive for an entire afternoon (my friend’s dad ran a used car lot) and the deep blue 1972 351 Mustang. I never drove a Ferrari or Lamborghini, but those were great times nonetheless. (And I did get to drive a Rolls Royce later when I became a chauffeur to work my way through grad school, though I wouldn’t call that a driver’s car.)

These days I’ve resigned myself to driving a family sedan. (Before that I drove a minivan and a station wagon.) But I still keep the flame burning by reading about the latest fast cars in magazines as well as the internet program “Leno’s Garage” (and when I can, the BBC’s “Top Gear”). And in recent years I’ve witnessed the rise of a new kind of vehicle. If Ferraris and Lamborghinis are “super cars” these new vehicles — insane automobiles built by folks like McLaren, Spyker, Koenigsegg, Pagani and Bugatti — are hypercars. A hypercar offers racing car levels of performance in street legal trim. 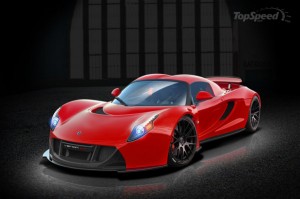 Consider, for example, the new Hennessey Venom GT2. (Hennessey is a boutique hypercar maker in Texas.) The Venom puts out 1500 horsepower (in other words, more than five Ferrari 328s!), has an estimated top speed of 278 mph, and an estimated 0-60 time of about 2 seconds. Not surprisingly, the $1.25 million dollar price tag reflects the level of performance.

I guess this level of performance should be a cause for celebration. So why do I suddenly find myself so ambivalent? I guess 1500 horsepower just seems kind of silly to me. (What’s wrong with the 325 ponies in the Porsche Cayman S?) Who needs to accelerate to highway speeds in 2 seconds? How do you park a million dollar vehicle at Walmart? And where do you put the groceries?