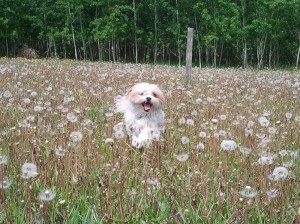 Walter asked for an argument against eating meat. Here it is.

This is Sonny, a Lhasa-Apso cross. We adopted him several years ago from the Humane Society. Lucky for him. Things could have worked out very differently for the little guy.

Imagine a different scenario in which the Humane Society is replaced with the Home Food Society, a group that sells stray cats and dogs to be raised for slaughter. One autumn day Sonny is adopted by a family, the Bowsers, who intend to fatten him up for slaughter so that he can be the main course the following Easter. But the Bowsers are not cruel people. They don’t keep Sonny in a crate stacked up in a warehouse like other people. Instead, they give him a good home as they play with him, take care of him, and get him nice and plump. Then on the Saturday before Easter Pa Bowser takes Sonny out into the field for one final frolic. He runs and plays, chasing sparrows and chipmunks. And then he comes running back when Pa Bowser whistles for him. A few seconds after this picture is taken Pa Bowser takes out a club and smashes Sonny on his cranium. He falls over, his eyes wild and bulging, his body shuddering in the dandelions. Another hard strike with the club and he lies still. Now home to be skinned, cleaned, and stuck in the roaster with carrots and potatoes.

Does the behavior of the Bowsers make you uncomfortable? Does it seem wrong? Note that Sonny is no more able to suffer than a pig or chicken or cow. Nor is he obviously more intelligent (not that dogs are dumber than we thought but rather that pigs, chickens and cows appear to be more intelligent than has commonly been assumed). Sonny may be, by the judgment of most people, a good deal cuter than a pig or chicken or cow, but cuteness is not a morally significant criterion.

While many of us are apt to judge the Bowsers — they would make it on the front page of most small town newspapers for unconscionable animal cruelty — they treated Sonny with a good deal more compassion than we ever extend to the pigs, chickens and cows that we regularly consume.

Something’s got to give. Either we’re wrong to treat dogs with compassion or we’re wrong not to extend that compassion to pigs, chickens and cows. If Easter dinner is not a morally sufficient reason to club Sonny to death, why is it sufficient to kill a pig or chicken or cow?