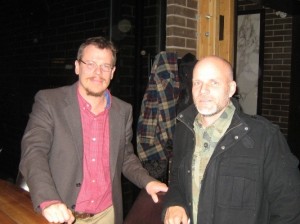 Last night I was delighted to have dinner with director Kevin Miller and introduce him for the Q&A of his film “Hellbound?” at the Cineplex in Edmonton. I’ve included my review of the film below.

“Hellbound?” opens up in New York on the anniversary of 9/11. I must admit my first impression was mixed given a certain sense of 9/11 saturation. Nonetheless, I could appreciate the logic of beginning a documentary on hell at Ground Zero. Not only are these terrorist acts taken by many to be the very embodiment of evil (thereby raising the question of justice and hell) but 9/11 is one horrific moment in a long history of justice by retribution. Al Qaeda attacked the United States as an act of retribution for the US presence in Saudi Arabia. And in the wake of 9/11 the United States responded in kind by attacking Afghanistan and Iraq, culminating in the killing of Osama bin Laden in Pakistan on May 2, 2011. An eye for an eye for an eye … for an eye for an eye.

Ground Zero serves as ground zero for the film, as we return several times to the streets of New York culminating in the closing scene of the film to which I will return. Kevin Miller, the director, makes his first appearance moments into the film on the streets of New York speaking to a couple members of the infamous Westboro Baptist Church (the “God hates fags … and pretty much everyone else too church”). There they are on the streets of the Big Apple, trampling all sense of decorum and basic humanity as they elevate their incendiary placards promoting the hatred of God on this somber anniversary.

Now I have to pause at this point and note the complaint of Mark Galli who opens his review of the film at “Christianity Today” by grumping: “You know a documentary about Christian faith is in trouble when it begins with film clips of and interviews with people from Westboro Baptist, the infamous hate-filled fundamentalist church in Topeka, Kansas.” What’s Galli’s problem? Apparently that Westboro folk are not representative of those who advocate for eternal conscious torment and thus their inclusion poisons the well. As far as cinematic complaints go, that sounds about as sophisticated as a thirteen year old Bieber fan dismissing the latest Wynton Marsalis album by complaining “It has too many horns”.

For any thoughtful reviewer of the film, it becomes clear that the Westboro folk are included for several thematic reasons. For example, there is the theme of hatred. Theologians from Tertullian to John Piper have argued that the elect will share God’s hatred for the reprobate and thereby will delight in their eternal damnation. There will be no sadness among the elect in eternity regarding the fate of the reprobate. Westboro folk unsettle us because they express hatred and happiness over hell now. So how can traditional advocates of hell avoid the prospect that Westboro presents a sobering prolepsis of eschatological misanthropy?

Finally, I note the theme of what I call “two-tiered total depravity”. Many advocates of traditional views of hell argue against universalism by appealing to our moral revulsion at the prospect of folk like Hitler being saved. (See my article “The very worst reason to reject universalism“.) Needless to say, many of us would not have Westboro congregants at the top of our to-be-saved list. The temptation to return hatred for hatred forces us to ask whether we would be disappointed if we were to find the most hateful folk receiving God’s grace. (I recommend everyone consider the list of those to be saved in the Lost Dogs song “Breathe Deep (the breath of God)”. If there are anybody you don’t want on that list ask yourself why.)

It must be said that the inclusion of the Westboro folk effectively illumines these themes in an emotionally powerful way that serves the purpose of the documentary well. And thus Galli’s initial complaint does indeed reflect poorly on his sophistication as a reviewer of film.

Now you’re probably wondering why I’ve taken the time to mount a critique of the opening sentence of Galli’s review. The reason is because the review, which really consists of little more than an angry and dismissive bit of sermonizing, has a single purpose: keep people from seeing this film. Folk like Galli apparently don’t even want people to have conversations on the universalist interpretation of hell. And I think I understand why. Because in his view the Church has already settled that issue. Perhaps Galli thinks of himself as a latter day Athanasius. Just as Athanasius looked with horror at the Third Council of Sirmium in 357 which rejected the homoousios doctrine of the Council of Nicaea so Galli looks with horror at a contemporary Sirmium which would question hell.

The problem is that the nature of hell is quite different from christology. The church has always had defenders of annihilationism and universalism as minority witnesses over the dominant eternal conscious torment view. And we cannot let people like Galli stifle these important conversations.

Miller interviews a large number of people for the film (perhaps too many) and he skillfully interweaves clips from the various interviews from pastors, theologians, evangelists, Bible scholars, atheists and others. Annihilationism does not get much attention as the battle lines are drawn between two sides. On the one hand there are those who defend eternal conscious torment (ranging from the scary pastor Mark Driscoll to the reasonable and approachable philosopher Jerry Walls). And on the other hand you have those who defend universalism (ranging from the affable Old Testament scholar/editor Robin Parry to the lively Frank Schaffer).

The best documentaries manage both to inform and entertain and Miller aims to do both. To that end the film makes sparing but effective use of animation to illumine the points of some talking heads as well as an intriguing, if somewhat tangential segment featuring heavy metal performers.

Along the way the film provides a sufficient number of provocative topics to fuel hours of searching discussion. What does the Bible really teach? How do we decide which texts will have interpretive trump when we read the Bible? How could the God of Jesus Christ require eternal retribution for some of his subjects? If those who are saved are no better than those who are damned, then is not the choice to save one group rather than the other not arbitrary? And so on.

Of course, equally hard questions could be raised about universalism. If God really will ultimately save all, why is the Bible not clearer on the fact? And if universalism is true then why have most Christians repudiated it? And can a church that believes in universal redemption through Christ maintain its fervent evangelical witness to a suffering world?

Based on the documentary’s failure to raise these questions one could argue that it is not a perfectly balanced portrayal of the issues by a disinterested bystander. It is, rather, a provocative exploration of the issues from a documentarian who has his own personal beliefs and invested interests which clearly lean in the direction of a universal reconciliation of all humanity through the atoning work of Christ.

But then why would somebody think that a perfectly balanced portrayal would provide a better documentary? People who complain about balance forget that a documentary isn’t the final word. It’s a platform for further discussion.  To that end the film achieves its goal in spades. It intrigues, provokes, surprises, and occasionally irritates.  And in that regard it does just what it should do.

This brings me to the final scene of the film which is back in New York and movingly depicts people on the evening of 9/11 releasing fragile, flickering paper lanterns into the dark water. And as these lanterns are carried out into the surrounding darkness, we see in their flickering light the promise of hope for a better tomorrow that might finally break the cycles of retributive violence … for now and eternity.

One of the most animated characters in the film is surely demonologist and exorcist Bob Larson who memorably says he believes Jesus and the demons (great line!). But let me tell you something you may not know. At one point Larson is shown performing an exorcism and he reaches out for a Bible to finish the job. The Bible that is handed to him is black with three colored sparkle stripes. I know that Bible. It is the same Bethany Hamilton Soul Surfer Zondervan Bible that I bought for my daughter for a buck at Goodwill. So for anybody else out there who has a Soul Surfer Bible on your shelf, you can be comforted knowing that it is every bit as effective at exorcisms as a traditional KJV Scofield Study Bible.