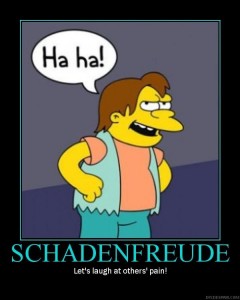 When I was eighteen I was driving along one day minding my own business when a cloud burst hit. Within minutes a benign, relatively grey day was transformed into a torrential downpour. I pulled up to a four way stop when, to my right, a Chrysler LeBaron convertible pulled up, the top down. I took a closer look and realized that the driver, who looked positively miserable, sopping wet and hunched over the steering wheel, had placed a very large plant in the front passenger seat which apparently made it impossible to close the top.

The situation struck me as positively comical and I began to laugh. Part of the laughter was due to the sheer comical nature of the situation. But part of it had a more disturbing source: pleasure in the misfortune of others.

The Germans call it Schadenfreude.