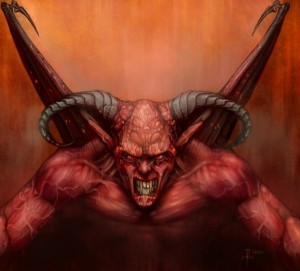 Again, Plantinga is not claiming that this is true. His point, rather, is that it is possibly true and thus there is no formal contradiction between the existence of God and the existence of evil.

So how have the critics of Christianity responded to Plantinga’s suggestion? The response is best summarized in Daniel Dennett’s humorous “Philosophical Lexicon” which includes the term “alvinize”:

alvinize, v. To stimulate protracted discussion by making a bizarre claim. “His contention that natural evil is due to Satanic agency alvinized his listeners.” (See: http://www.philosophicallexicon.com/)

To be sure, Plantinga has a point. It is possible that natural evil might be due to demonic agency. It is possible that legions of demons are employed every June-to-January in the “Atlantic Ocean Hurricane Task-Force” (AOHTF) while others are employed full time at the “Pacific Rim Committee for Earthquakes” (PRCE), even as others labor at the “Department for Evolving Predators” (DEP) and still others moonlight at the “Institute for Spreading Cancer” (ISC) or the “Society for Droughts and Floods” (SDF). So come on Mr. Mephistopheles, roll up your sleeves and get to work. There’s misery to be spread about like so much fresh manure.

At the same time, one might reasonably worry: “Though I remove logical contradictions through creative defenses and have not plausibility, I am become as sounding brass, or a tinkling cymbal.” If people cannot believe something is plausibly true, then arguing for its possible truth by invoking something outrageous exacts a significant cost. In short, people may concede “Okay, logically speaking you’ve removed a defeater, but in terms of plausibility your beliefs look even crazier than ever.”

There is, as they say, no second chance to make a first impression. If people hear you invoking demons to explain natural evil, even as a broadly logical possibility, you are likely to lose your audience.

Gregory Boyd makes his appeal not as a mere logically possible defense but as a plausible theodicy. In Satan and the Problem of Evil (IVP Academic, 2001) he notes that the church fathers attributed all sorts of natural evils to demonic agency. (Indeed, Boyd believes “natural” evil doesn’t really exist; hence his use of scare quotes throughout the book.) Boyd’s right: the church fathers did believe this. But then there are all sorts of things Christians believed fifteen hundred years ago that we would not want to commend for serious consideration. And I am quite confident that most denizens of the twenty-first century will not find it remotely plausible to propose that the cycling of hurricanes or the ickiness of traumatic insemination is attributable to the tinkering of malevolent spiritual agencies in the natural world.

The way I see it, invoking demons to explain natural evils (except, perhaps, within very limited constraints) is tantamount to pulling out the DDT fogger to deal with head lice: it’s a “remedy” whose negative consequences far outweigh the positive benefits. Unless, of course, you really are looking to alvinize your audience.