Imagine that Mormon missionaries come to the door of an irascible Christian. “Let us tell you about the community started by Joseph Smith!” they say.

Irascible looks back skeptically and replies, “Actually, why don’t we talk about the evidence that Mormonism is false. Like the erroneous Mormon claim that the historic Christian faith disappeared after the death of the last apostles. Bzzzt! False. At the end of the second century Irenaeus traced an unbroken line of leaders of the church of Rome from the time of Peter and Paul down to his own time. His point was that the church has always guarded the gospel proclamation. There simply is no time for your mass apostasy to have occurred.”

The missionaries glance at one another nervously. “Can we share with you the burning we had in our bosom after praying about the Book of Mormon?”

“Only if I can share with you the burning I had in my bosom after eating too many buffalo wings!” Irascible sneers in reply.

They don’t call him “Irascible” for nothing. While you might blame Irascible for being irascible, you can’t blame him for being incredulous. If he believes Mormonism is making outrageous claims, one cannot deal with his incredulity simply by telling the story louder, slower, and with due emphasis on the action verbs. 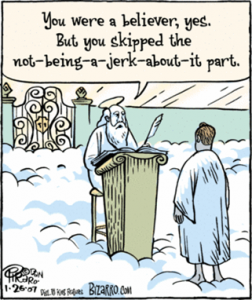 While you can’t do without argument, it would be equally shortsighted to think that apologetics simply is about sound argumentation. After all, if you’re a jerk about your beliefs, people will do everything they can to disagree with you. Irascible may be a great apologist in terms of evidence and argument, but he may end up leaving every encounter with people saying not “What a brain!” but “What a jerk!”

Seeing that I quoted Robert Webber to negative effect last time around, let’s consider some more of his words, this time with a more positive assessment: “In a pagan world where every person ‘lives for himself,’ the pagans don’t cry, ‘Look at the power of their rational arguments’ but ‘See how they love one another!’” (The Younger Evangelicals, 95) Webber’s right to an extent: the experience of Christians living consistently with their Christian convictions is hugely important to the plausibility of their worldview. The problem, again, is that Webber represents the pendulum swinging from one extreme to another. Rational arguments should complement love for another. It isn’t an either/or proposition, and we must categorically reject any attempt to pit the life of the mind against the work of the hands.

In fact, we can think about a community that consistently lives out a rigorous ethic as constituting an argument for the truth of that community’s beliefs. Imagine that a salesman comes to your door selling new “Flake Off!” dandruff shampoo. As he talks you look on the shoulders of his black sport coat and are puzzled to see it covered with white flakes. An early snow? That seems unlikely. After all, it is July and you can see heat radiating off your asphalt driveway. Good gosh, you think to yourself, he’s selling a dandruff shampoo while his shoulders are covered with the stuff! That experience would go a good distance toward undermining your resolve to give Flake Off a try. And that’s what happens when Christians do not live in a way consistent with their ethical claims. The incongruence between belief and action constitutes an argument against the belief. Needless to say the converse is true as well: lives that complement beliefs professed provide a sort of argument for those beliefs.

“So I guess I’m in partial agreement with the storyteller talk. It would need to be developed more, because as it stands it sounds a lot like ‘we need testimonials!’ I’d say, we need even more than that. We need culture: books and stories and video games and shows and movies and all the rest.” 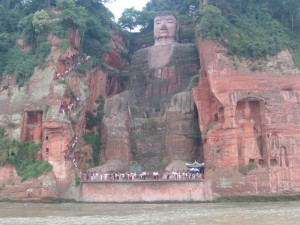 Let me give a very concrete illustration (actually, if you’re going to be nit-picky it’s a stone illustration): the Giant Leshan Buddha of China. Begun in 713, it is the largest Buddha in the world. For thirteen hundred years it has towered over the residents of Sichuan in southwest China.

What role do you think the statue has had in reinforcing the plausiblity structures for the Buddhist residents of Sichuan? Think about it. Fred has only ever seen a Buddha when he was at The Pottery Barn and saw a fat brass paperweight. By contrast, Feng has grown up in the shadow of the Leshan Buddha. When Fred hears “Buddha” he thinks “unnecessary knick knack”. When Feng hears “Buddha” he thinks “awe-inspiring statue.” Simply based on that difference, which is more likely to consider the Buddhist worldview seriously? The question answers itself.

For more discussion see my article “Worshipping a Flying Teapot?”