There’s an old joke about a chauffeur who drives a quantum physicist to an important speaking engagement. Just before they arrive the physicist says “Listen, I’m exhausted and still jeg-lagged. I simply must get some sleep. Why don’t we change outfits, and you can go up on the dais and read my lecture and I’ll sit in the back of the room and have a snooze. Simple. Whaddaya say pal?”

The chauffeur agrees and goes into the building pretending to be the physicist. He delivers the lecture without a hitch and is just about to make his quick departure when the host walks up to the microphone and says “Well it looks like we have time for one question. Anyone?” Immediately hands go up and the host picks someone to speak. With that a bespectacled scientist stands up and spouts off an impenetrable question full of highly specialized technical terminology.

The chauffeur stands there for a painful moment uncertain what to do. But then he has a stroke of genius. He strides confidently up to the microphone and says “That question is so easy I’m going to have my chauffeur answer it.”

It is a good thing the chauffeur had the real expert close at hand. But what happens when a layperson is mistaken for an expert and doesn’t have backup support?

Alas, this is the ongoing problem faced by Joel Osteen. The fellow sells millions of books, he has the largest church in the US, he has been lauded as “America’s Pastor”, and he regularly makes the talk show circuit as some sort of informed talking head on behalf of Christianity. In other words, he’s wearing the physicist’s outfit. But alas, with only a single semester of post-high school education (at Oral Roberts University), he is utterly lacking in the formal education required to offer an informed opinion on virtually all matters pertaining to Christianity (the obvious exception being how to run a successful prosperity gospel empire). 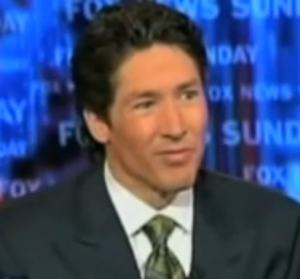 Can you imagine how painful it would have been for the chauffeur had the physicist not been in the back of the room? Well take a look at this exchange between Chris Wallace and Joel Osteen on Fox News. (The exchange happened back in December 2007.) Wallace asked Osteen whether he thought Mormons were Christians. Poor Joel. Look at the pained expression in his eyes, the grimace barely concealed on his face. Is there a theologian at the back of the room? Anyone out there with more than a semester of Bible college who wants to field this one?

But there wasn’t. So poor Joel plowed ahead and opined that Mormons are Christians, while clearly knowing nothing about Mormons, except that they believe in Jesus. (Of course everyone from Deepak Chopra to Insane Clown Posse declares belief in Jesus, so by Joel’s criterion the church is a very big tent indeed.)

I remember the brief firestorm this clip created several years ago. Now watching it again my first inclination was to offer a rendition of Kermit’s immortal “It’s not easy being green” for poor Joel:

But then that was replaced by a second inclination. Why extend Mr. Osteen my sympathy? After all, he chooses to go on network television like some sort of pundit, knowing that the second he gets asked a theological question he’ll go as blank as Sarah Palin being queried on foreign policy by Katie Couric. Why reward such reckless behavior with sympathy just so the fellow can sell more self-help spirituality books?

To cap things off, as the intelligent “expert” representing Christian opinion he makes the rest of us look shallow, insipid and ignorant. Inevitably people will wonder: is this really the best those Christians have to offer? So while it is truly not that easy being Joel Osteen, neither is his pseudo-punditry making things easy for the rest of us.