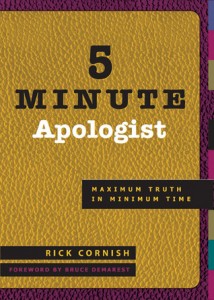 We live in a time when many people have attention spans equivalent to the length of the average commercial break. Enter the 5 Minute Apologist by Rick Cornish. It isn’t a great book. But neither is it a very bad one. It is, rather, a predictable exercise in compromise. Some of those compromises are excusable, but others are not, and over the next few days I’ll be focusing on selected portions of the book, drawing attention to examples of each.

My first engagement is with chapter 2, “Divorcing Faith from Reason” (pp. 24-26), where Cornish makes three points defending the rationality of Christian faith. I’m going to focus on the third and fourth points. He writes:

“Third, the Christian faith is distinct from other kinds of faith, which are not so reasonable. Jehovah’s Witnesses, Mormons, and other world religions have a type of faith, but none hold up under serious scrutiny. Christianity, however, survives the most strenuous investigation, standing on hard facts which can be rationally judged.” (25)

I don’t know Rick Cornish. I read on the NavPress website that he has “an earned doctorate degree from Denver Seminary as well as a masters degree in Greek and history from the University of Nebraska.” Those are decent credentials. He also has taught internationally in China and Ukraine. So he probably knows a fair bit about some major religions other than Christianity. But does he know enough of all the bewilderingly complex, nuanced, multi-faceted belief systems in the world to make the claim that ultimately only Christianity can be rationally believed? I highly doubt it. I would expect that Cornish is familiar with a handful of defeaters to several of the world’s main religions. But it strains credulity to think that he is aware of all the ways that adherents to those belief systems have proposed satisfying the demands of those defeaters. And he most certainly isn’t aware of all the possible defeaters to all the major belief systems, still less to all the defeater-defeaters that apologists for those various belief systems have proposed.

So where does this bold claim come from? It would appear most likely that Cornish is making this claim a priori. That is, he is assuming categorically that there must be unanswerable defeaters for all religious belief systems except Christianity.

I have two observations to make about that claim. First, nothing in Christianity necessitates the truth of that claim. It could be, for example, that Christianity is true and even so God has allowed there to be a defeater defeater to a particular Christian claim. Maybe, for example, it is beyond the ability of theologians to present a theory of incarnation or Trinity which can satisfy the demands of both logic and orthodoxy. And maybe God allowed this situation to test our faith. I don’t know if this is the case or not (philosophical reflection on both doctrines is ongoing), but the fact that it could be the case presents a challenge to Cornish’s apparent assumption that it isn’t the case.

My second point is that categorically assuming based on some unstated premise that all other religious belief systems face unanswerable defeaters is not the way an apologist should be proceeding. Apologists are supposed to give a reason for the hope we have within, not make ungrounded assumptions.

Now here’s the predictable response: “Come on Rauser, there’s only so much you can do in five minutes. Give Cornish a break.”

Sorry, I don’t buy it. In five minutes you can lay a foundation for thinking about faith in a way that answers the more facile faith/reason oppositions without invoking ungrounded claims about the irrationality of all other religious belief systems.

This brings me to Cornish’s fourth point:

“Fourth, some Christian teachings are mysterious, beyond our finite understanding. Doctrines such as the Trinity … and the Incarnation … are profound mysteries. But even though not fully understood, they’re not contradictions. They violate no formal laws of logic. In the final analysis, however, the Trinity and Incarnation can never be fully understood through reason. But that does not render the Christian faith irrational.” (26)

It is true that the doctrines themselves are not explicitly contradictory. But attempting to provide a theoretical account of the meaning of each doctrine which meets the demands of orthodoxy does quickly emesh a person in contradiction. I lay out these problems in chapters 2 and 4 of Faith Lacking Understanding (Paternoster, 2008). I agree with Cornish that the challenges Christians face in developing satisfactory theoretical accounts of incarnation and Trinity do not immediately call into question the rationality of Christian belief. But this is not because there is not a problem with the cognitive content of these beliefs. It is, rather, because every major belief system faces logical, moral and plausibility objections at particular points, and thus Christianity is certianly not the question-begging exception.

Of course some belief systems suffer from more serious intellectual problems than others, and in some cases the defeaters are so significant so as to call into question the basic rationality of the belief system. But to suggest that Christianity faces no serious intellectual objections and thus that it is ultimately the only rational religious belief system is not only an oversimplification. It is an outright distortion. And distortions are not excusable whether they come in a discourse of five hours or only five minutes.