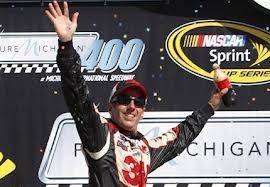 Apparently I hit a nerve with Ray Ingles with my declaration that Nascar could function as somebody’s religion. I said:

If Billy Bob spends all his money and time watching Nascar, if that’s what gives meaning to his life, then Billy Bob’s commitment to Nascar may indeed function in his life the way a conventional “religion” functions in the life of somebody else.

NASCAR is “a set of beliefs concerning the cause, nature, and purpose of the universe”? Dang, I gotta start turning my TV on over the weekend…

And when I didn’t respond he then sputtered:

Hey, I missed it at first – we might actually have a Randal-centric definition of ‘religion’ there! “That which gives meaning to someone’s life.” What do you say, Randal? That about sum it up?

But there isn’t really anything controversial about what I said. Imagine that you’re on a boat to witness the wedding of a friend. The seas grow stormy and the boat capsizes. Most people grab life preservers or life jackets as they wait for help to arrive. But others grab whatever they can. One bloke actually maintains buoyancy by holding onto the styrofoam wedding cake. Prior to that moment nobody intended for the styrofoam wedding cake to serve as a flotation device. That was not even on anybody’s radar screen. Nor did that guy intend to be using it in that way. Regardless, we now found ourselves in the situation where he is using it as a flotation device.

Here again is the dictionary definition of “religion” that I provided:

“a set of beliefs concerning the cause, nature, and purpose of the universe, especially when considered as the creation of a superhuman agency or agencies, usually involving devotional and ritual observances, and often containing a moral code governing the conduct of human affairs.”

As I noted, this defintion has problems. For example, tying religion especially to belief in superhuman agencies is clearly false because lukewarm suburban Pentecostals are not more “religious” than devout Buddhist monks.

There is another problem with this definition. It is heavily weighted toward belief. While this represents well the creedal fixations of a religion like Christianity, it is problematic as a general definition of religion since creedal assent is often of minimal importance in other religions. Consider the phenomenon of secular Jews who hold to few if any of the traditional beliefs of their religion and yet which devoutly commemmorate all the communal religious events from Yom Kippur to Rosh Hashanah. They would consider themselves Jews and their religion Judaism even though from the perspective of a creedally focused Christian the doctrinal center has been hollowed out.

But wait a minute. What if Billy Bob calls himself a Christian? Maybe he goes to church a couple times a month (when Nascar isn’t on television) and occasionally tithes a portion of his income (though not nearly as much as he spends on Nascar tickets). Isn’t he Christian (even if not an exemplary one)?

What we need in our analysis is the possiblity that a person can simultaneously have conflicting religious allegiances. Let’s return to the bloke holding onto the styrofoam wedding cake. Let’s say that his arms are wrapped around the cake and it is bearing the bulk of his weight. But he also has a life preserver hooked onto his ankle which is holding up one leg.

It may be proper to address Billy Bob’s religious allegiances similarly. He has a primary religious commitment to Nascar as well as a secondary commitment to Christianity. When a crisis occurs he prays to God rather than Richard Petty. So Chrisitianity bears some weight in his life. But on a day to day basis Nascar is doing most of the work. (Think of the bloke bearing all his weight on the life preserver every time a big wave comes, and then immediately reverting to the wedding cake when the waters grow calm again.)

So yes, Nascar can indeed function as a religion, one that is found in meaningful, communally sustaining practices rather than beliefs. It was not intended to function as a religion and it is not a particularly good religion by most conventional measures. But for people like Billy Bob it is functionally a religion, one that bears the weight of their devotional practices on a daily basis.