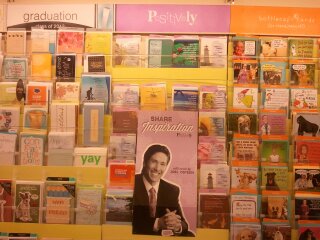 We live in a world wracked by war, internecine suburban gun violence, cancer, unemployment, divorce, and death. To be honest, it can be disheartening at times. So what do you give a world that suffers so? Is it possible to spread around a little bit of positivity?

That was the question I was wrestling with the other day when I was wandering forlornly at the grocery store, killing time while my wife was lingering somewhere between the deli meats and freshly baked bread.

By chance I found myself in the greeting card section and suddenly saw those two words — “Share Inspiration” — complemented by the smiling visage of Joel Osteen set against a powder-pink backdrop.

Joel Osteen may be the happiest man in America, nay the world.

Of course you’d be happy too if you were pastor of the largest church in America (give or take), best-selling author, uber rich Texan with perfect Bryl-creemed hair, gleaming pearly whites, and a ten million dollar mansion in River Oaks to come home to every night.

And now Joel was willing to share a bit of that inspiration with us, the suffering unwashed masses, for a mere $4.95 a pop. Who thought inspiration could be so cheap?

Now if only it were inexpensive too.