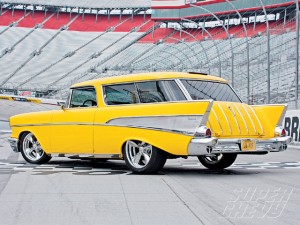 This morning on the way to school my daughter asked me a pointed question: “Why aren’t station wagons cool?” It was a great question. “That isn’t true,” I replied. And with a few clicks of my smart phone I presented her with a picture of a 1955 Chevy Nomad, one of the coolest station wagons, like ever. (Admittedly it was only two doors and not exactly stock.)

She conceded that the Nomad I showed her looked cool (replete with shiny Crager mags). But she sensed that I was being evasive. Granted, there may be exceptions. But still, most station wagons are not cool. Why is that?

At that moment I saw a Cadillac CTS station wagon (oops, I mean “sport wagon”, a rare sighting in North America, to be sure, though rather more common in station/sport wagon friendly Europe). “That’s cool,” I said triumphantly, “And it’s a station wagon.”

She barely glanced at the Caddy. “No it isn’t.” she said with a withering sigh.

“Okay,” I said haughtily. “So you disagree with the majority of automotive journalists.”

Inexplicably, she didn’t care about her indefensible dissent from majority pundit opinion.

And I was left to ponder the unponderable: why aren’t station wagons more cool (in North America)?

As difficult as that question was, I must say it is a relief when compared to the doctrines of Trinity and incarnation.